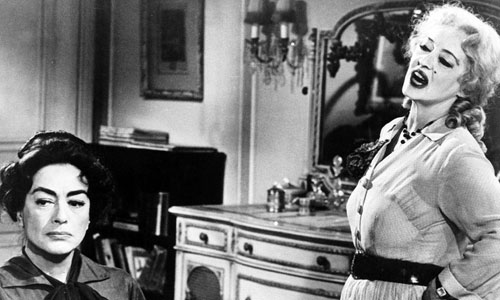 Love them or hate them, celebrities are a huge part of pop culture as we follow their trials and tribulations navigating their way throughout Hollywood. As much as we love to hear about various celebrity triumph, we also can’t help be a bit obsessed with a good amount of their drama as well.

While many celebrities are full of personal drama, over the years there has been a good amount of celebrity feuds with one another as well and that is when things get really spiteful and juicy!

We have complied a collection of some of the most recognized (and most talked) about celebrity feuds of all time for your reading pleasure. Be sure to let us know if there are any other good ones that you feel we may have missed!

One of the most infamous celebrity feuds occurred between actresses Bette Davis and Joan Crawford and it truly got ugly. Their feud began when Joan Crawford, who was known as a silver screen siren at the time, began dating her film co-star actor Franchot Tone, who just so happened to be the leading man to Bette Davis’s role in the film “Dangerous”.

It seems the Davis had a bit of a crush on Tone, however he ended up choosing Crawford, who he soon married after the filming wrapped. It was at that point that that Feud began! The two were just hateful to one another, sniping back and forth in the press and even went so far as to make an attempt to ruin an Academy Award nomination for Davis.

When Davis was nominated for an Oscar in 1963 for her role in “Whatever Happened To Baby Jane”, which also happened to star Crawford as well, Crawford arranged with the other nominees to collect the award on their behalf, as she felt slighted by the Academy’s snub. Anne Bancroft won, and Crawford read her speech for her, while Davis watched backstage.

While some celebrity feuds are able to come to a resolution the feud between Davis and Crawford lasted a lifetime. When Crawford learned that Davis had passed away she is quoted as saying “You should never say bad things about the dead, you should say only good. Joan Crawford is dead. Good!”  Ouch!

Another infamous celebrity feud from days gone by was between sibling actresses Olivia de Havilland and Joan Fontaine. It was a classic case of sibling rivalry between the pair that began in 1935 when Olivia landed her first big role in Hollywood and Fontaine later followed with her first big role in 1937. In the years that went by the two sisters began fiercely competing with one another over film roles, lovers, friends and awards for the rest of their lives.

The feud between the two hit it’s worst point when Fontaine was forced to take the surname of her stepfather, as there were too many de Havilland’s in Hollywood. She ended up beating out her sister for an Academy Award win, however when de Havilland finally did win she snubbed her sister when she attempted to congratulate her and it was famously caught on film.

It is questionable if their feud was ever resolved, as Fontaine has publicly stated over the years that there really was no “feud”, just normal sibling rivalry. She claimed they never shared harsh words or had a quarrel and most of the so-called feud was created by the media.

Actress Debbie Reynolds and her longtime friend actress Elizabeth Taylor made headlines back in the day when Taylor’s third husband Mike Todd tragically passed away in an airplane crash in 1958. As as grieving widow she ended up falling into the arms of singer Eddie Fisher, who just so happened to be married to Reynolds at the time.

Fisher ended up leaving Reynolds for Taylor and the two ended up remarrying each other only a year later! That is definitely one way to end a friendship! Fisher left Reynolds a single mother to raise their two children Carrie and Todd.

In the end Reynolds and Taylor ended up rectifying their feud back in 1966 when they ended up staying on the same floor of the Queen Elizabeth ocean liner. The pair even ended up starring in a film together called “These Old Broads” directed by Reynold’s daughter the late Carrie Fisher.

In more recent years there was an epic amount of rivalry on the music charts between icons Michael Jackson and Prince. When their albums tied for the number one spot back in 1982, the feud was definitely on! Prince did not seem pleased with Michael Jackson’s main stream appeal while Jackson would poke fun a Prince’s artistry.

Prince turned down a role in the music video for Michael Jackson’s “Bad” which later went to actor Wesley Snipes and in a moment of extreme pettiness Prince allegedly played his bass directly into Jackson’s face during a live concert performance.

It is not known if the two ever resolved their differences, however when Prince learned that Jackson had passed away he is said to have closed off Paisley Park and locked himself away in his bedroom for days to grieve. Looks like they had some respect for one another as artist after all.

Other infamous music feud that must be mentioned in the feud between singer Taylor Swift and rapper Kanye West and his wife Kim Kardashian-West. Kayne West began the feud when he hopped on stage and interrupted Swift’s acceptance speech for winning Best Female Video at the 2009 MTV Video Music Awards. West grabbed the mic and told everyone that Beyonce should have won instead.

West also made a lewd reference to Swift in his song “Famous” during which he alluded that she would sleep with him. Swift claims to have no knowledge that the phrase was going to be used in the song, however Kayne’s wife Kim Kardashian later ended up releasing a recording of a phone conversation between West and Swift were she gave her blessing to use the lyric.

As far as we know this feud has yet to be resolved and both West and Swift continue to make lyrical jabs at one another through their music.

Taylor Swift has also famously feuded with pop singer Katy Perry as well. While the pair used to be BFF’s, it seems that Perry went behind Swift’s back and tried to hire some crew members out from under her during her “RED” stadium tour. The crew ended up going with Perry and that is what ignited the fire.

Swift gave an interview to Rolling Stone and claimed that Perry did “something so horrible” that they were now “straight-up enemies” and it wasn’t even over a boy! She never named Perry by name, but everyone was able to put two and two together especially after Perry posted a cryptic tweet urging her followers to “watch out for the Regina George- in sheep’s clothing” referencing the villain character from the film “Mean Girls”.

Apparently this feud still continues as well, as Perry even posted a Snapchat of herself dancing to the Kayne West song “Famous” and giving a facial signal when the Taylor Swift lyric came on!

Actress Gwyneth Paltrow and domestic guru Martha Stewart threw their fair share of shade at one another over the years as well, as Martha Stewart began poking fun at Paltrow’s “GOOP” publication. She said that Paltrow should stick to acting.

They threw snipes at each other on the pages of their respective publications when Stewart published an article about pies and titled it “A Conscious Coupling” a dig at Paltrow’s “Conscious Uncoupling” with Coldplay singer Chris Martin. Paltrow then returned fire publishing an article titled “Jailbird Cake” to jab at Stewart’s time spent behind bars.

Lately all has been quiet between the two, but we doubt they ever fully resolved their issues.

We don’t think anyone will ever forget the infamous Twitter war between President Donald Trump and actress Rosie O’Donnell. O’Donnell criticized Trump for failing to fire Miss USA Tara Conner despite her admission of illicit drug and alcohol abuse.

Trump hopped on Twitter and tweeted some horrible slurs at O’Donnell calling her a “real loser” and infamously “a pig”.  During on of the debates leading up to the Presidential election O’Donnell was brought up once again with Trump saying no one felt sorry for O’Donnell and she deserved his harsh comments. O”Donnell claims she had never felt more bullied in her life.

To this day their feud still continues with O’Donnell continuing to criticize Trump via social media.

And finally one of the biggest celebrity feuds occurred between rappers Tupac Shakur and Biggie Smalls aka Notorious B.I.G. that ended in the tragic deaths of both rap superstars. The feud began when Tupac as robbed and shot five times back in 1994 in the lobby of a New York City recording studio. It is claimed that Biggie knew about the incident about a week in advance, so it was allegedly planned.

This started the famous East Coast versus West Coast feud that was shape the face of hip-hop music for years to come. According to Time Magazine,  the feud hit it’s peak at the 1995 Source Awards, while no physical beefing happened between Tupac and Biggie, lines were drawn between both of their respective crews, showing just how deep-rooted the rivalry between the two rappers and what they represented was. The highlight of the night was Suge Knight’s now-notorious speech about Death Row Records (Tupac’s label) that seemingly shaded Diddy and Bad Boy Records (Biggie’s label.) At one point during the ceremony, Tupac’s friend Snoop Dogg called out the East Coast (“The East Coast ain’t got love for Dr. Dre and Snoop Dogg?”) while Diddy defended it (“I live in the East, and I’m gonna die in the East”).”

The feud between the two rappers was never repaired and they continued to diss one another through their music right up until their untimely deaths. Tupac was shot to death in Las Vegas and Biggie died a year later. You would think that their beef would have died with them however the East Coast/West Coast battle still continues to thrive.

Well, folks, there you have our compilation of some of the worse celebrity feuds of all time. We have to throw in some honorable mentions such as the feud between Tom Cruise and Brook Shields over the use of antidepressants and post-partum depression, Heather Locklear and Denise Richards fighting over both Richie Sambora and Charlie Sheen and of course boxers Mohammad Ali and Joe Frazier.

Again let us know any we missed!

The post A Collection Of The Most Intense Celebrity Feuds! appeared first on PCM Lifestyle.