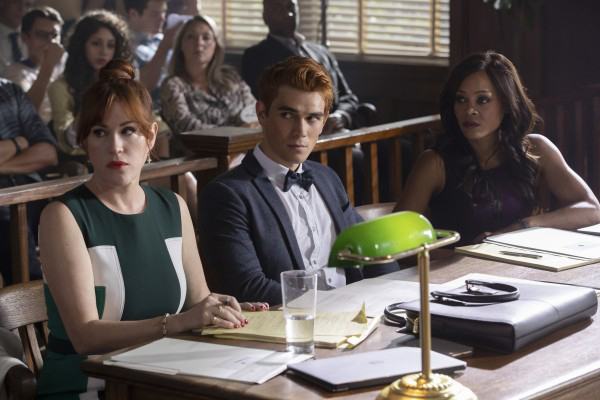 We would be lying through our teeth if we didn’t say that we are absolutely obsessed with The CW’s hit series “Riverdale”, which is loosely based upon the “Archie” comic book series, with a much darker tone.

So much went down in season two that we were left wondering exactly where the network was planning to take things in season three, but rest assured, just when you thought “Riverdale” couldn’t go any darker, just wait until you see what is in-store for the upcoming new season.

When we find the characters in the premiere they are in a time of peace, where everyone is just trying to get along, meaning The Serpents, The Ghoulies and of course, Hiram Lodge, however don’t expect that to last very long! The show picks up again three months after the events of the season two finale and we see Archie on trial for murder.

As far as relationships go, Cheryl and Toni are in a great place, and relax, all you Bughead lovers, Betty and Jughead appear to still be going strong, but can we say the same for Archie and Veronica? We will just have to wait and see!

When speaking with KJ Apa about the darkness of season two, he commented, “Yeah, it did get pretty dark and I was actually stoked on that, as from an acting point of view it was more challenging. It is always good to be uncomfortable with stuff and I felt it was definitely uncomfortable and challenging for a lot of that season.”

Apa goes on to say, “I think he [Archie] is trying to redeem himself this season with the wrongs and mistakes he made, so maybe we are not going to go as dark for him.”

When speaking about how much danger we are going to find The Serpents in going into season three, Cole Sprouse reveals, “The Serpents are definitely in kind of a rag-tag place. They are broken and their ranks are really depleted, so a lot of it is improvement and building back up. Jughead is going to be tested as the leader of The Serpents quite a bit, but he is in a much more calm and collected place.  He is not as hot-headed and more a tactician this season.”

Sprouse also told us that, “The Serpents are going to take a real shaking when Jughead’s mother comes back this season, which is going to be one of his major narrative points in season three.”

When speaking about how the court case was going to affect Archie’s relationship with his father, Luke Perry says, “Archie is my whole life and I don’t dig it and whatever happens in there is going to have a big effect on me.”

When talking more details about the new season Marisol Nichols tell us, “There is going to be a new mystery and it is somewhat unexpected and different that then mysteries we’ve done the past two seasons.” Mark Consuelos chimes in, “It’s all very strange and a different path.”

Discussing Veronica’s relationship with her parents going into season three, Nichols tells us, “As a mom, anyone who hurts your daughter is an enemy, so what do you do when that person is your husband? For his reasons, right or wrong, he had a lot do with Archie going down like this, so I think that’s going to effect Hermoine and Veronica’s relationship and hopefully they can get back to a point where they were in season one.”

Consuelos adds, “There was a turning point in Hiram’s relationship with Veronica where he tells her ‘you’re cut off if you don’t do what I say’ and he didn’t think she would choose the other side, but she chose the other side. I think he is going to give her some opportunities to go back and say I get it, I’m going to play ball and I would think he would find a way to release Archie or help Archie. She is choosing a path like Hiram and they are both very stubborn.”

Of course fans are incredibly anxious to learn more about the F.P. and Alice hook-up and the shippers are going crazy. When speaking about whether or not we are going to see any more of that or even get a confirmation, Madchen Amick reveals, “Yes” and Ulrich adds, “We really wanted it!” But Amick adds, “It’ never smooth sailing in Riverdale.” So it looks like we can expect some drama.

Talking about the place The Serpents find themselves, Ulrich says, “If they are not careful, they run the risk of becoming obsolete. There are some things that happen early on that test that further. They are not disbanded but they are certainly dislocated.”

Speaking about whether or not Betty and Veronica will be rallying behind Archie, Lili Reinhart says, “Yes, definitely” and Camila Mendes adds, “They are all fighting for Archie.”

You can check out the full interview from the “Riverdale” press room below:

The post The Cast Of ‘Riverdale’ Give Us The Inside Scoop On Season 3! appeared first on Age of The Nerd.