Welcomes Foo Fighters, System Of A Down, Disturbed,

Bring Me The Horizon, Ghost, The Prodigy & Many More

Multiplatinum artists Foo Fighters, System Of A Down and Disturbed lead the spectacular and diverse music lineup for Sonic Temple, which will also feature performances from Bring Me The Horizon, The Prodigy, Ghost, Halestorm, Lamb of God, Chevelle, Joan Jett And The Blackhearts, The Cult, and many other chart-topping and up-and-coming music artists. SiriusXM’s Comedy & Spoken Word Tent will include comedy from Andrew Dice Clay, Pauly Shore, and others, as well as a spoken word set from Henry Rollins. The festival will feature three music stages, premium food and beverage selections, art installations, and enhanced onsite experiences.

System Of A Down’s Shavo Odadjian says, “Although in its inaugural year, Sonic Temple’s pedigree is proven, and its roots are strong; it made total sense for us to be involved. One could argue that it was a long time coming. We’ll see you all in Columbus this May.”

David Draiman of Disturbed says, “We are honored to share the stage with all of our amazingly talented friends and colleagues at the upcoming Sonic Temple Festival in Columbus, Ohio. Are You Ready?!?!”

The inaugural Sonic Temple Art + Music Festival replaces the long-standing Rock On The Range, America’s largest and most acclaimed rock festival, which routinely sold out over its 12-year span.

Danny Wimmer, founder of Danny Wimmer Presents said, “I am so proud of what we accomplished with Rock On The Range, and with the debut of Sonic Temple Art + Music Festival, we’re excited to bring our devoted rock fans and the city of Columbus a one-of-a-kind, world-class event that expands on the festival experience. The idea behind Sonic Temple is walking into something bigger than yourself, where YOU belong, or where you were always meant to be. The crowd is unparalleled, and the energy is electrifying, like going to a place of worship. We want this festival to be a temple of rock n’ roll. We want this to be the ultimate rock experience for the true fans who love the genre as much as we do.”

Initial ticket prices for Sonic Temple will be as follows: 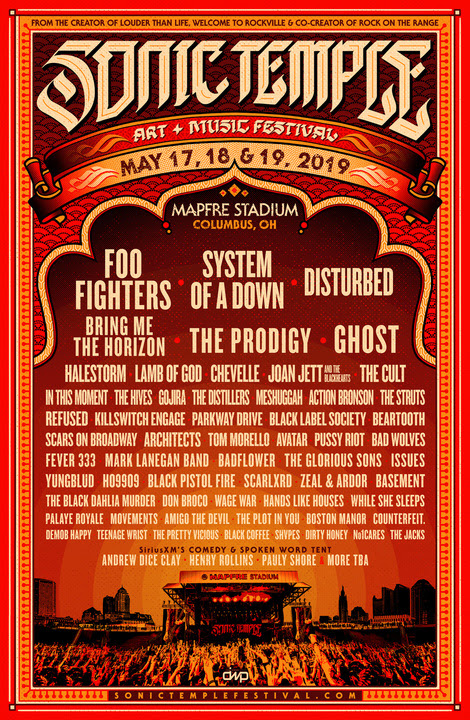 Monster Energy: Monster Energy will be keeping all fans fueled up and ready to rock by offering free sampling on their Monster Energy viewing deck. Enjoy Monster Energy drinks from one of the best seats in the house. Make sure to check back throughout the festival for a schedule of Monster Energy’s interactive artist experiences.

Fxck Cancer x Dyin 2 Live Dreams Program: Fxck Cancer’s mission is to fight cancer by raising awareness and education about early cancer detection and prevention, ultimately putting an end to late-stage cancer diagnosis. Through the Dyin 2 Live Dreams program, they look to enrich the lives of those fighting cancer by offering them a VIP experience that they hope will bring joy, inspiration, and courage. In doing this, they hope to help give the cancer fighter a chance to forget, even if it’s only for a day, what they are going through. For more information please visit, www.fxckcancer.org. Fxck Cancer and Dyin 2 Live Dreams are programs of the F C Cancer Foundation, a 501c3 nonprofit organization. #TogetherWeFight #FxckCancer

Sonic Temple Art + Music Festival is produced by Los Angeles-based Danny Wimmer Presents, one of the largest independent producers of destination rock music festivals in America. DWP events include Louder Than Life, Aftershock, Welcome To Rockville, Bourbon & Beyond, Chicago Open Air and more. They’re also the co-creators ofRock On The Range, America’s largest and most acclaimed rock festival, which celebrated its 12th and final year in 2018 with 140,000 in attendance.

About Danny Wimmer Presents: Since 1993, music industry veteran Danny Wimmer has been producing concerts and festivals, both large and small. In 2011, he formed Danny Wimmer Presents, which now produces several of the largest rock and alternative festivals in the U.S. By combining A-list talent with local cuisine and culture, DWP has become recognized within the industry for delivering the highest-quality entertainment experiences to fans, artists, sponsors, partners and host cities. DWP creates memorable and all-encompassing festival experiences, leaving both consumers and partners with lasting and meaningful impressions. DWP will continue to add new music festivals to its already stellar portfolio, which includes Rock On The Range, Aftershock Festival, Welcome To Rockville, Carolina Rebellion, Louder Than Life, Bourbon & Beyond, and Chicago Open Air, among others.