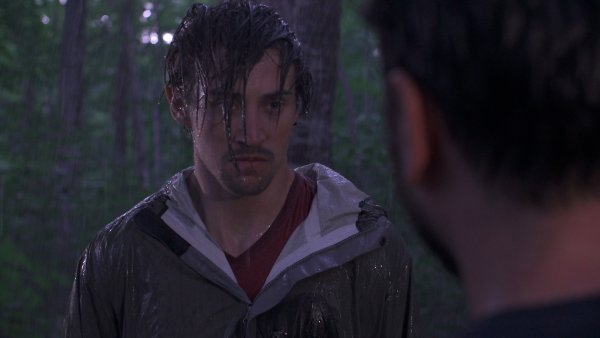 After a death, a group of friends set out to the woods in search of adventure and the bonding of great friendships. No, this is not a Stand By Me remake, it’s The Answer.

Following the tragic and sudden death of a spouse, a group of friends take their recently widowed friend out on a camping trip to the woods in hopes of bringing him back from the deep hole of depression.

Okay, so maybe Stand By Me and The Answer doesn’t have the exact same premise but it’s kind of close, right? Anyways, the film is described as a “male chick flick,” whatever that means. The Answer got off to a quick and interesting start. Gavin’s (Christian Bester) wife dies in a brutal car accident while he is out doing a book signing. The film keeps the darkness lingering throughout the film with some light jokes. Where the film starts to lose me is in the woods. I mean that metaphorically and literally.

Once the group of friends go into the woods, things get repetitive. It seemed like every few minutes into that time that they are in the woods, two friends get into some kind of conflict, only to make up. This happens numerous times and with just about each of the characters have a spat with another of the group. I found it to get boring and annoying very quickly. I mean there surely could have been some other subplot that would happen with these characters to show growth, but it just seemed like the writer and director Wade Wofford was a bit lazy with the storytelling. Though, I would say that towards the end of the film the storytelling gets more interesting as it was in the beginning of the film.

Another thing that had me on the fence with the film was the acting. The acting seemed inconsistent. By that, I mean that there were some scenes where the actors would do a pretty good job and you would be able to feel emotion. Then in other scenes, the same actors would just be bland. It could have been a chemistry thing between the actors but once again, I felt that it was there one minute and gone the next.

The production of the film was fairly decent. At times, there were some nicely done and pretty creative shots, and at other times there were some shaky camera work going on – not often but it’s there. I found the music to be quite enjoyable as well, so the film had that going for it.

The Answer is definitely not a terrible film, it’s just that I feel that there was too much inconsistency throughout the film, and the inconsistency became the only thing that was consistent.

The post ‘The Answer’ Review appeared first on Age of The Nerd.