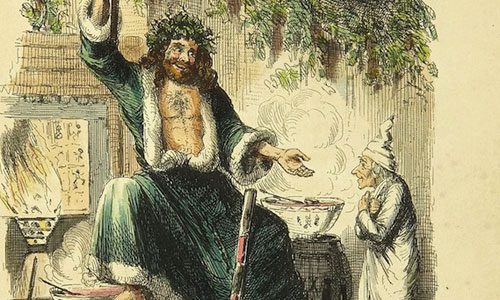 A Christmas Carol may be the greatest piece of classic literature ever written, it can definitely be said that is the most popular ever written.  Very few people do not know the story, in fact even the name of the main character, Scrooge, has passed into our language as name to call someone who is mean and stingy.  But A Christmas Carol is much more than that.

A Christmas Carol was written in 1843 by Charles Dickens.  Dickens was strapped for cash and had just participated in a lecture series about the social injustices of the time.  In a brain storm Dickens wrote A Christmas Carol in 6 weeks and published it himself, It was an immediate best seller and sold out quickly.  Dickens did not make much money on the first run of the book, the expense of self-publishing was greater than he had anticipated, but the book would go on to become his most popular work and would eventually show a strong profit.

To get a strong view of A Christmas Carol you must remember that it was published in 1843 and the branch of science known as psychology had not even begun to be recognized if even thought of at all.  If Freud was around he would have been in diapers.  A Christmas Carol is however a story of redemption as well as a fantasy of psychological therapy.

We find out at the beginning of the book that Scrooge is tight fisted with money, a rotten guy to work for, a guy with a mean personality and a man who is generally disliked.  His old partner, suffering the consequences of his having the same general attributes, does an intervention on Scrooge’s behalf.  The Scrooge in a single night’s time is shown his past, then is shown his present followed by being shown the inevitable consequences for his future if he does not change.

This is basically what happens in therapy.  We discuss the pain of our past which could include sexual or emotional abuse.  We evaluate our present, in the light of the knowledge that our past has led us to the existence we are currently experiencing, and then we look at the future and figure out what will happen if we stay the way are and finally come up with a plan to change our future.  If we stick to the plan our future becomes better as we become better people.

Christmas is a great time to evaluate our lives.  To take a hard look at where our past actions have led us to and then evaluate our current situation ending with adjusting our lives so our future will be better.

I have a personal tradition in regards to A Christmas Carol.  As the book is 5 chapters long, I read one chapter a night starting on the 21st of December for 4 nights and then I read the last chapter on the morning of December 25th.  In doing so I have the chance to contemplate my own life making adjustments as I read.  When Christmas day comes I can revel in the day first by reading about the joy of Scrooge’s own changes and then enjoying the day itself knowing that my own future looks a bit brighter.

I have kept the tradition for many years and it has brought me great joy.  I’ve even done it with the film versions of the story.  Watching a portion of the movie each night and ending with the last bit on Christmas day.  However you decide to spend Christmas this year, I highly suggest bringing A Christmas Carol into your own celebration.  If you can’t read the book, put its principles into action.  Evaluate your life and have an incredible New Year.