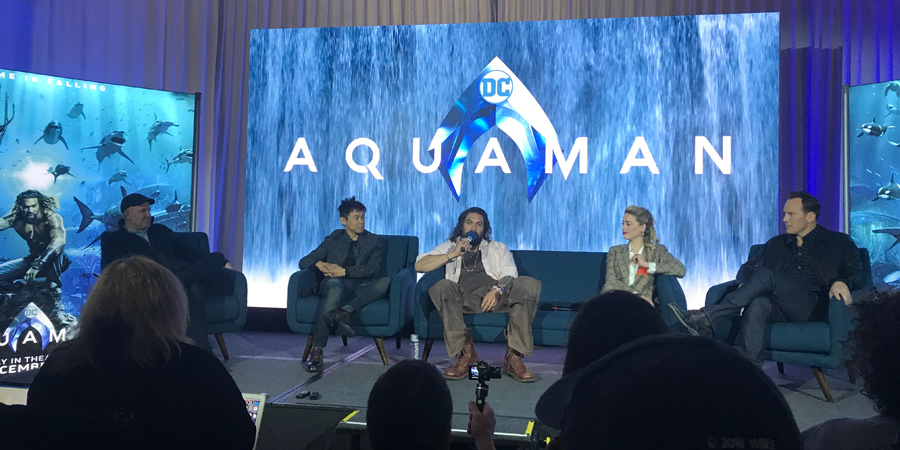 While we are anxiously awaiting the upcoming release of “Aquaman” from Warner Bros. Pictures on December 21st, we recently had a chance to catch up with director James Wan to talk about just what he hopes that fans will take away from the film, as we all know, comic book fans can often times make-up a very critical fan base.

“I want the fans to know that I’m a fan myself and I really respect the source material. For the fans that have stood by Aquaman for all these years, while people made fun of him and made fun of his comic book and all the characters in his world, I want them to see that this is finally the opportunity for them to get revenge (laughs)!

This move is made with a lot of love and passion and I really love this film and I love these characters and the world these characters reside in and I really want them to know that I was very respectful of the source material. Then on the other side I want to introduce all these guys to a whole new generation of kids that never grew up with this character, so I want the two separate worlds to come together. “

“Aquaman” tells the origin story of half-surface dweller, half-Atlantean Arthur Curry that takes him on a journey of his lifetime. It is one that will not only force him to face who he really is, but to discover if he is worthy of who he was born to be … a king! The action-packed adventure spans the vast, visually breathtaking  underwater world of the seven seas, and stars Jason Momoa in the title role.

Wan also revealed that he is excited to undertake the first standalone feature for this complex character, saying

“Aquaman is a very powerful guy and can handle action on a god-like scale. But what I love the most about him is that what drives him comes from a very human place. To me, the most important thing is the story I’m telling and that audiences care about the characters and want to go along on their adventure.”

Wan goes on to say that

“In many ways, the movie is about wish fulfillment, and to me, that was also the bonus of making this film, my own wish fulfillment, to make a world-bonding, world-creation movie. We cultivated all the different visuals , the characters, the outfits, the creatures … everything. That’s my dream come true. Luckily, I had the most creative team behind the scenes and the most talented cast to go on this journey with me”

Wan took an incredibly epic journey himself in realizing his vision for this film and he comments,

“I feel this is a story that’s very relevant, with elements reflected in the world we’re living in now, which, to me, is important … telling stories that speak to the times. I think that, ultimately, every superhero story should be a lot of fun and take you on an amazing adventure, and at the same time make you feel you’ve learned something from these characters and that you, yourself, have the ability to do good. And you don’t necessarily need a cape to be able to do that!”

“Aquaman” will be released in both 3D and 2D and IMAX, and will be distributed world-wide by Warner Bros. Pictures. The film is rated PG-13 for sequences of sci-fi violence and action, and for some language.

The post Aquaman Director James Wan Wants Fans To Know He’s A Fan Himself appeared first on Age of The Nerd.