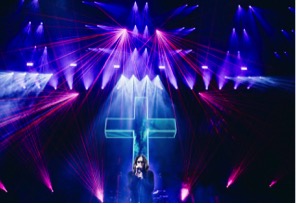 Photo credit: Ross Halfin
It was the place to be, and a helluva way to ring in the New Year–a mind-blowing extravaganza with the titans of heavy music delivering one spectacular set after another, complete with massive eye-popping productions. The first-ever OZZFEST New Year’s Eve celebration (Monday, December 31) at The Forum in Los Angeles was all this and more, adding up to one of the most memorable OZZFESTs ever.
The day-into-night event featured 10 hours of live music that culminated with a 90-minute career-spanning set from Rock and Roll Hall of Fame inductee and Grammy® Award-winning singer, songwriter and festival namesake OZZY OSBOURNE. The afternoon kicked off with sets from Zakk Sabbath, DevilDriver and Wednesday 13 on the outdoor stage before moving indoors. The main stage was lit up by performances from OZZFEST alumni Rob Zombie, Marilyn Manson, and Jonathan Davis (of Korn)and Body Count featuring Ice-T (in their OZZFEST debut) before OSBOURNE and his band (longtime collaborators  Zakk Wylde [Guitar], Blasko [Bass], Tommy Clufetos [Drums] and Adam Wakeman [Keyboards]) took to the stage at 11:30 PM, counting down to the new year with a mega mirror ball, confetti storm, fake snow blasts and huge balloon drop. The Forum will never be the same again.

Photo credit: Ross Halfin
Here’s some early press reaction
“Ozzy Osbourne rang in 2019 with a number of his friends as part of Ozzfest New Year’s Eve…Those friends included Rob Zombie, Marilyn Manson, Jonathan Davis, and more…Ozzy and the crowd rang in the new year with a countdown, a giant disco ball, and confetti.”
–Heavy Consequence, 1-1-19
“Ozzfest has taken many forms over the years, but on December 31, 2018 it served as a way send out 2018 with a major location-based event and ring in 2019 with some of rock and metal’s finest throwing a bash to remember. Ozzy Osbourne…returned to the concert stage at the Forum full of energy and ready to count down the final minutes of the year. But before that, a stellar lineup rocked fans inside and outdoors at the Forum during a brisk but sunny afternoon…”
–Loudwire, 1-1-19
“Ozzy Osbourne rang in the new year in Los Angeles, headlining the festival he founded, Ozzfest, at the Forum. The one-off show kicked off early, with the venue grounds transformed into a holiday wonderland complete with food trucks and an outdoor stage… Ozzy’s set included such classics as “Mama I’m Coming Home,” “Crazy Train,” and “No More Tears” as well as Black Sabbath hits “War Pigs,” and “Fairies Wear Boots.” He paused the show at a few minutes shy of midnight for the final countdown, and rang in 2019 with red fireworks and a shower of Ozzy-branded confetti.
–Variety, 1-1-19
www.Ozzfest.com
www.facebook.com/ozzfestofficial
www.instagram.com/theozzfest/
www.twitter.com/theozzfest