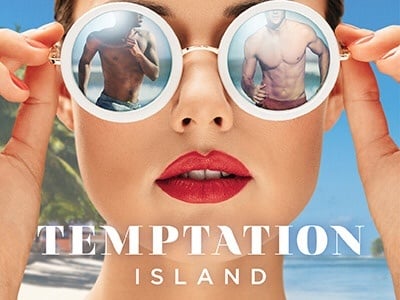 TEMPTATION ISLAND follows four unmarried couples at a crossroads in their relationship. Each must decide whether to commit to each other or ultimately give in to the temptation – a decision that could change the course of their life forever. Together, the couples travel to a romantic paradise, where they join 24 sexy single men and women all in search of love. Brace yourselves for hot and heavy nights as the couples embark on an adventure to begin dating these new prospects.

Information on how to apply to be a cast member for Season 2 can be found at USANetwork.com.

Will they stay or will they stray? Fans can share their predictions and follow along on social via:

USA Network, the leader in cable entertainment, offers a powerful stable of dramatic, comedic and unscripted originals in more than 102 million U.S. homes. The network also features spectacular live television, a dynamic portfolio of acquired series and the best in blockbuster theatrical films and entertainment events. A trailblazer in digital innovation and storytelling, USA is defining, driving and setting the industry standard for Social TV. USA is a program service of NBCUniversal Cable Entertainment, a division of NBCUniversal. USA’s award-winning website is located at http://www.usanetwork.com. Watch USA Network anywhere: On Demand, online or across mobile and connected TVs.