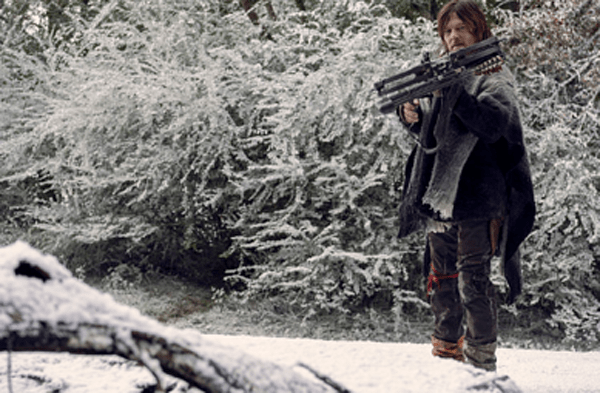 “The Walking Dead” season nine finales will air on Sunday, March 31st at 9:00 p.m. ET/CT. On the all-new episode, “The Storm,” in the aftermath of an overwhelming loss, the communities must brave a ferocious blizzard. As one group deals with an enemy from within, another is forced to make a life or death decision. The episode is written by Angela Kang and Matthew Negrete and directed by Greg Nicotero.

The second half of “The Walking Dead” Season 9 finds our groups of survivors, both old and new, continuing to deal with the impact of events that took place during the six years that have passed. Since the disappearance of Rick, many of these characters have become strangers to each other, and in some ways, strangers to themselves. What they do know is that they are in undeniable danger. They will soon realize the world just beyond does not operate as they thought. The group’s rules and ways of survival no longer guarantee their safety. A whole new threat has crossed their paths, and they soon discover it’s unlike any threat they have encountered or endured before. The group will start to question what they think they see. What may appear to be normal in this post-apocalyptic world could actually be more disturbing and terrifying than when the apocalypse first broke out. All that is certain is the stakes are high and numerous.

Following a re-air of season one episode one of Killing Eve, viewers can catch an all-new episode of “Talking Dead” hosted by Chris Hardwick at 11:11 p.m. ET/CT, featuring “The Walking Dead” showrunner Angela Kang and cast member Melissa McBride.

The post Tune In Sunday For A Bloody Walking Dead Season Finale appeared first on Age of The Nerd.