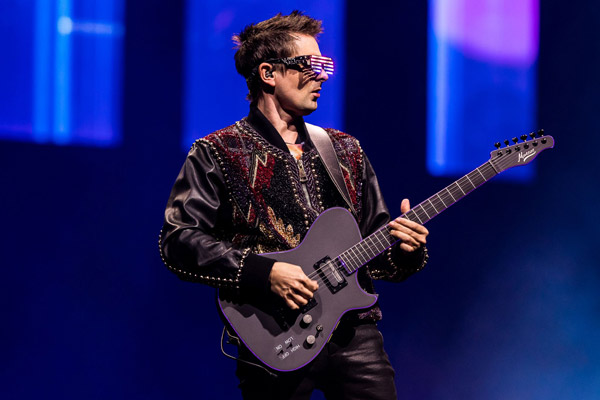 No one can ever say that Muse doesn’t know how to put on a phenomenal show! This time around it was quite apparent that the band spared no expense on the production that went into bringing the “Simulation Theory” tour to Philadelphia’s Wells Fargo Center. Muse’s show was chock full of spectacular laser lighting effects, LED-clad back-up dancer and brass musicians, and of course, we couldn’t possibly forget the ginormous robotic skeleton!  It was definitely out of this world, to say the least.

Muse is on tour in support of their eight album release “Simulation Theory” and have proved once again with this album that they are fearless when it comes to changing up their style, this time opting for a more 80’s retro vibe complete with heavy synths and searing guitar riffs. We adore the fact that Muse cannot be boxed into a single music genre and we witnessed fans of all ages out enjoying this amazing band in the live environment.

When speaking about what fans should expect from the tour, frontman Matthew Bellamy was quoted saying it would “blow people’s minds” and we couldn’t agree more. Going out to see a show should be an experience and that is exactly what you get from Muse show, as there was never a dull moment from start to finish.

Just the opening of the show was enough to leave us staring the stage in awe as a brass band donning lit-up LED suits marched down the catwalk and eventually formed a circle as Bellamy rose from the center of the stage with his metal glove and light up glasses. It was like something out of a fantastic sci-fi film or video game and we seriously couldn’t get enough.

Even before the band took the stage the audience was treated to “The Stranger Things” soundtrack which had the crowd going wild!  The creators behind the “The Stranger Things” graphics designed the artwork for Muse’s latest album, as well as, the merchandise that is being sold on the tour. The eighties retro vibe is just fantastic.

Bellamy, drummer Dominic Howard, and bassist Chris Wolstenholme prove time and time again their musical prowess and always leave us impressed at just how much thought and energy go into executing such an amazing live performance.

The band played a solid setlist that contained a mix of new material such as “Propaganda”, “Pressure” “Algorithm” and “Pray” alongside fans favorites such as “Plug In Baby”, “The Dark Side”, Uprising”, Supermassive Blackhole”, “Hysteria”, “Madness” and closing out the set with the incredible “Knights of Cydonia”.  We really enjoyed the stripped-down acoustic version of “Dig Down” that was played by the full band from a smaller stage at the end of the massive catwalk, giving the song a truly intimate feel.

Muse has definitely cemented their place as one of the greatest live bands and the “Simulation Theory” tour may have just been one of the best show that we have seen in 2019 thus far.

Openers SWMRS gave a highly energetic performance to get the audience hyped for the sensory overload that was coming from Muse. Seriously, front-man Cole Becker was all over the place and the band appeared to be having the time of their lives up there on the stage. They are definitely a band we would like to check out in a more intimate venue again in the future.

The post Muse Shows Their Love For ‘Stranger Things’ And All Things Retro During Philadelphia Tour Stop appeared first on Age of The Nerd.