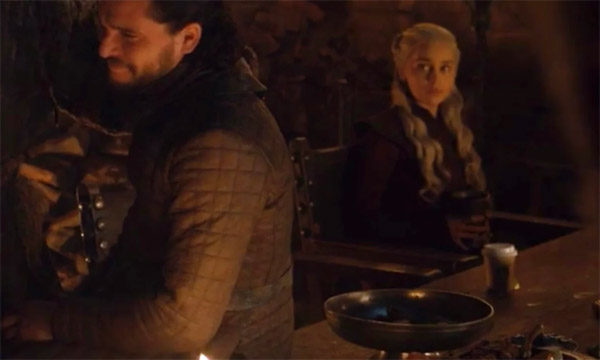 Many eagle-eyed fans discovered while watching last nights episode of “Game Of Throne” one item that more than likely didn’t belong unless there is a Starbucks somewhere in Westeros that we didn’t realize.

During the celebration/feast scene that took place to celebrate the defeat of the Night King, sitting on the table in-between Dany and Jon Snow in none other than a Starbucks coffee cup right in plain sight. Fans could not believe that the production team would have missed this during the final edits.

Countless memes have now been making their way all over the internet, joking about the mystery coffee cup, so much so that HBO has now issued a statement regarding the incident saying in response to inquiries from those who saw a craft services coffee cup in Sunday night’s episode of GAME OF THRONES, HBO states, “The latte that appeared in the episode was a mistake. Daenerys had ordered an herbal tea.”

There you have it folks!  No Starbucks for the “Mother Of Dragons”, she is a herbal tea kind of girl!

The post HBO Issues A Statement Regarding ‘The Starbucks Cup’ appeared first on Age of The Nerd.