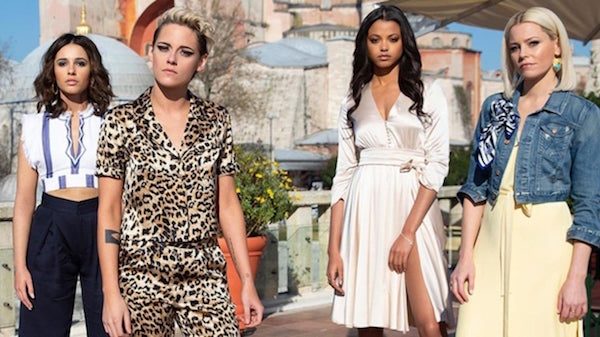 Sony Pictures has unveiled the first trailer for the Charlie’s Angels reboot, which is written & directed by Elizabeth Banks. The film stars  Kristen Stewart, Naomi Scott, and Ella Balinska as the new generation of Angels. Additionally, Banks also stars as Bosley, the person who acts as the bridge between the Angels and their eponymous employer.

While the film is essentially a re-imagining, it also frames itself as a continuation of the franchise. In this version, Charlie’s Angels have expanded worldwide as an “independent security and intelligence service”. Now, there are multiple teams of angels, who are led by different Bosleys. Below is the first trailer for Charlie’s Angels.

Despite the pedigree of talent involved, this trailer is fairly disappointing overall. While there is some personality in the trailer, it’s just trying too hard. The cast looks solid, but the trailer doesn’t really give any idea of the story, which makes it feel lackluster. Moreover, the recent failure of MIB: International looms large, mostly because it feels similar to the trailer for that movie. There’s nothing here that screams originality, which is a shame because Banks is emerging as an interesting filmmaking presence in Hollywood.

Perhaps the most troubling aspect of this trailer is that it is more interested in promoting a new “single” for the film than anything else. Although the idea of having a single accompany this movie is fine, it’s tacky to have it accompany a debut trailer like this. Hopefully, this trailer is just a sign of bad marketing and not indicative of the quality of the film itself. Either way, this first trailer isn’t really a good look for the would-be franchise.

The film opens November 15th, 2019, which also stars Patrick Stewart, Djimon Hounsou, Noah Centineo, Sam Claflin, and Jonathan Tucker. Below, you can find the official synopsis for Charlie’s Angels, along with some images from the film.

In Banks’ bold vision, Kristen Stewart, Naomi Scott, and Ella Balinska are working for the mysterious Charles Townsend, whose security and investigative agency has expanded internationally. With the world’s smartest, bravest, and most highly trained women all over the globe, there are now teams of Angels guided by multiple Bosleys taking on the toughest jobs everywhere. The screenplay is by Elizabeth Banks from a story by Evan Spiliotopoulos and David Auburn.

The post The First Charlie’s Angels Trailer Introduce A New Generation Of Angels appeared first on Age of The Nerd.