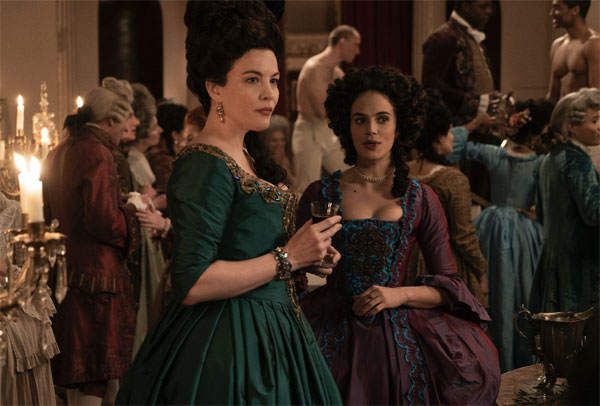 Set against the backdrop of 18th century Georgian London, Harlots continues to follow the fortunes of the Wells family. A year after the dramatic events of Season 2, Margaret (Samantha Morton) has been sent to America in chains and Lydia Quigley (Lesley Manville) is vanquished and in Bedlam. It seems that the Wells girls can finally free themselves of their mother’s feud, helped by allies such as Lady Fitz (Liv Tyler). But Charlotte Wells (Jessica Brown-Findlay) soon learns that running a lucrative brothel brings enemies as well as friends, including new pimp in town Isaac Pincher (Alfie Allen). Meanwhile, Lydia still finds a way to bite, even in her darkest hour.

We seriously can’t get enough of this series and from what we have already seen in season three, this season is certainly going to once again take viewers on a roller coast ride of emotions. While we cannot reveal too much at this point, just know that there is still plenty of delicious drama in-store for the Wells family and with many new characters in the midst, there is definitely a lot more conflict to come.

The series stars Academy Award nominees Samantha Morton and Lesley Manville, Jessica Brown-Findlay, Eloise Smyth and Liv Tyler. Joining the cast this season as new foes for the women of Soho are Alfie Allen (Game of Thrones, The Predator) and Ash Hunter (Hamilton West End, The Secret Agent) as the Pincher brothers.

The post Harlots Season 3 Is Now Streaming On Hulu appeared first on Age of The Nerd.