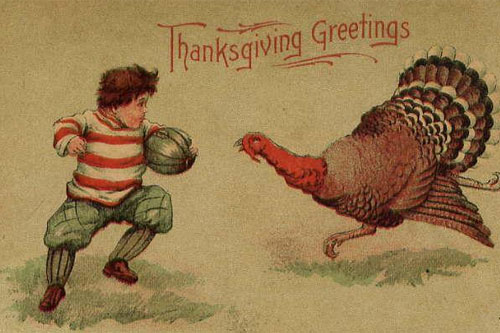 In 1863, Abraham Lincoln, declared the last Thursday of November to be a National Day of Thanksgiving. The fourth Thursday in November was officially sanctioned by Congress as a legal holiday in 1941, under President Franklin D. Roosevelt. The ‘Thanksgiving” event that the Pilgrims had included about fifty Pilgrims and ninety Wampanoag Indians. The Indians may not have been invited per se, but came to see what the celebration was all about, and were welcomed in.

The Pilgrims took their religion very seriously – if the Thanksgiving was actually a religious event, they probably would not have let the Indians (non-Christians) join in. A religious event would have mostly involved praying all day – not celebrating.

Unlike today’s feast consisting of turkey, stuffing, sweet potatoes, cranberry, etc – the original Thanksgiving menu probably consisted of the following items: duck, venison, fish, lobster, clams, berries, fruit, pumpkin, and squash. The pilgrims weren’t really prepared for baking, and didn’t have access to butter, etc, so they did not have pies at the first Thanksgiving.

‘Turducken’ – deboned turkey, duck and chicken nested inside each other then cooked is popular with many families.

Being held on a Thursday, often with no work on Fridays for white collar employees, the extended four day weekend is often a time for families to gather together – the Saturday after Thanksgiving is often a time for high school, college, or locals reunions.

Many people blame the turkey for the sleepiness after the big meal, but chances are it is the trimmings, carbohydrate-rich sides and desserts that allow tryptophan into the body that cause the need for a nap.

The Wednesday night before is actually one of the biggest nights of the year for bars and nightclubs, matching and sometimes surpassing St. Patrick’s Day for consuming alcoholic beverages. Sadly, that also adds to the statistics that say that US deaths spike over Thanksgiving.

Another tradition is ‘making a wish’ – breaking the wishbone of the bird, often between a senior and junior member of the family.

Often families take advantage of the time together to play games – indoor and outdoor, and make plans for Christmas. Outside of the distractions of television, it is a popular time to ‘get to know’ other family members better. It is often a good time to learn about the family tree.

Thanksgiving is also the prelude to Black Friday, named because it is one of the biggest shopping days of the year – and the day (hopefully) retail businesses make a significant profit.

Things best not discussed on this day: politics, religion and family gossip.

The obligatory Thanksgiving Joke:
A lady was picking through the frozen turkeys at the grocery store but she couldn’t find one big enough for her family. She asked a stock boy, ‘Do these turkeys get any bigger?’