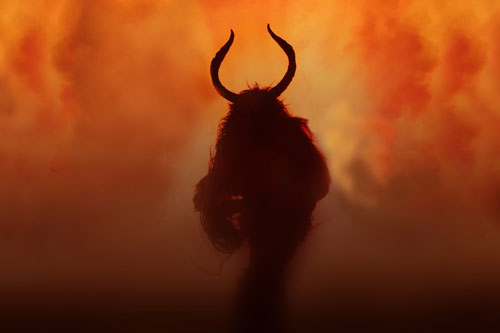 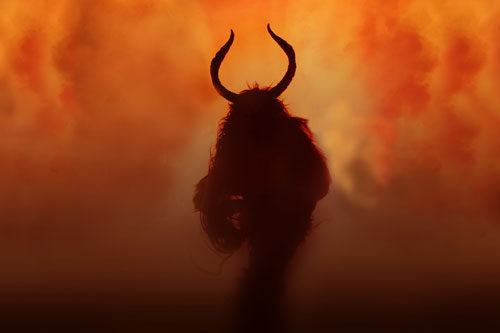 (PCM) We all know the story behind the legend that is St. Nicholas a.k.a. Santa Claus who pays visits to well-behaved children all over the world rewarding them with gifts at Christmas. However did you know that according to Alpine folk-lore good ol’ St. Nick has a dark companion named Krampus, who travels around with him punishing the children who have misbehaved. The legend of Krampus says that he even captures the naughtiest children in his sack and takes them away to his lair. Pretty terrifying, huh?

Krampus, whose name is derived from the German word krampen, meaning claw, is said to be the son of Hel in Norse mythology.The legend is part of a centuries-old Christmas tradition in Germany, where Christmas celebrations begin in early December.

As the story claims, Krampus shows up the night before December 6, known as Krampus Night. December 6 also happens to be St. Nicholas Day, when German children look outside their door to see if the shoe or boot they’d left out the night before contains either presents (a reward for good behavior) or a rod ( for bad behavior).

Krampus is generally portrayed in the classic devil fashion with cloven hooves and horns, but he is also at times shown as man dressed in all black, a demon cloaked in the robes of St. Nicholas, or as some sort of man-beast. Krampus has been quietly infiltrating our culture for quite some time, and while the first Christmas cards featuring St. Nicholas were sold here in The States, Krampus cards were popping up all over Europe. The humor in the cards was very tongue-in-cheek, and they definitely portrayed a darker side to the holiday season.

In the early 1900′s the Krampus cards were re-introduced in America and are now considered quite the collector item. Krampus has also made appearances in modern pop culture in show’s such as Adult Swim’s The Venture Brothers, CW’s Supernatural, The Colbert Report and most recently NBC’s Grimm. There have also been several festivals popping up here in The States dedicated to Krampus and the darker side of holiday season. You can find a full list of events taking place here!

Nothing sets your holiday spirit ablaze than a little Krampus carol! Enjoy!

The post The Curious History Behind Krampus The Holiday Devil appeared first on Weird But True News.