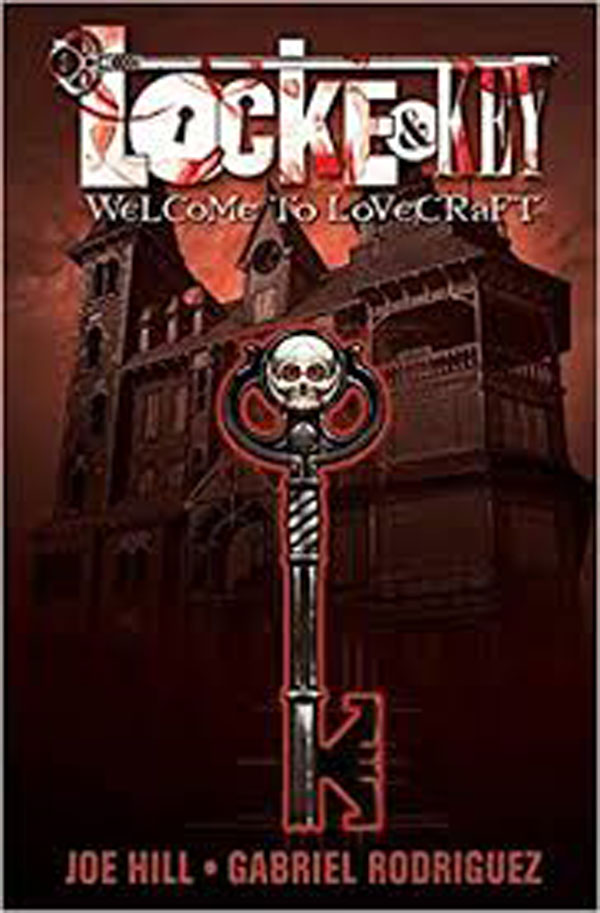 Next month the critically acclaimed comic book Locke and Key will be hitting Netflix. The first book was published back in 2008. The story revolves around the Locke family who moves into there ancestral family home after the murder of there father. The family discovers magical keys, which they must use against evil creatures who want the keys and their powers.

At SDCC we had the amazing opportunity to interview Gabriel Rodriguez the artist behind Locke and Key. In the interview, we discussed how he met Joe Hill the writer of the comic book and a lot about art and inspiration. Check it out below.

AOT: So how have you been joining your Comic-Con ?

GR: Amazing. It’s always a great, great time of the year for me that I have the chance to come here and hang out with my friends and share with people the time with people from IDW.

AOT: Do you spend most of your time there?

GR: Yeah. I work a lot in Chile and come here a couple of times a year basically, for San Diego or New York or another Comic-Con. And then I get to hang out with real-life collaborators and editors. The people at IDW have always treated me well.

AOT: IDW has some amazing talent.

AOT: So, what age did you discover that you were like, I like doing this thing called drama drawling?

GR: I have the earliest recollection of my life I’ve been drawing so I never imagined that I would be able to make a living out of it. Yeah, came as a surprise. And I remember when I discovered comic books when I was young. I was immediately fascinated by this combination of narrative and art. So, from then on, I was, I’ve been in love with this craft, since I remember as a reader, and then to have the chance to do my own books and get them. Like, an absolute.

AOT: Did you ever study anything that art? Like pictures or anything like how people would respond to shapes and stuff?

GR: Yeah. I’ve always been very focused and observe the environment and observe people. In a weird way, when you’re a comic book artist, you must be like, in your brain sort of like an actor. Watch people and see how they react and see how their body moves. And see how their faces play when they add in different emotions. Basically, graphic storytelling is about building empathy between the drawings, reader, and you. You must create the illusion that what they’re looking at, is not a drawing, but a person or an action or an event. And that’s why I always tell aspiring artists that are going to work in comics, your job is to make people forget that they’re watching drawings. And that’s the trick when you get into the story. Look, watching the drawings, and they just care about what’s going on in the story. That’s when you made it. So yeah, it’s basically about making them get involved in the story.

AOT: Did you previously know, Joe Hill before Locke and Key?

GR: I got introduced to Joe through this project. I remember I had finished another book for IDW. And then I got an email. And they told me well we had an interview with this guy, Joe hills and amazingly talented writer, he had these weird, amazing idea for a story with magic keys, and I think you should write it. Chris Ryall the editor, who’s now the publisher of IDW. Back then told me that well, I sent Joe, a couple of not so good samples of other artists and your work, because I wanted you to be picked up again to do this. He sent me the pitch of Locke and Key, which was like, two pages, one page in which they describe briefly what the mythology of the house was about, and what the drama was going to be. And then another which was seven names of the main characters of the first start with just two- or three-lines description of it. And the challenge was, what you’re going to come up with. With just two pages, and it just creates life itself.

GR: Then I sent the sketches that I imagined out  Joe told and he told me when he saw them, and it was exactly how he saw Locke’s to be portrayed. And then we got in touch. And immediately we realized that we had that like the same sensibility to how to handle the story and the kind of story that we wanted to tell. So yeah, for me it was like a dream come true that the first job that I had to do is create our own project and it was exactly the kind of story that I wanted.

AOT: What attracted you as a child to draw? Did you like the horror genre element in the comics instead of some other genre?

GR: It was the idea of playing with some fantastic elements that you can easily get done well in comics, and it’s hard to be enough in a different kind of storytelling. And very early on, I was very engaged with stories that were about character development. So, you see the superheroes or not story or in a science fiction tale or in a horror story. So, if you got the right approach, and that’s what engages me. I remember, well my teenage years and were the most important influence for me as a reader. And to realize what comic books would be like, on one hand, the Vertigo comics from the early years and basically stories like Sandman or stories by Grant Morrison, with Doom Patrol and Animal Man were a huge influence on me. And on the other hand, weird, experimental European comics. All those influences merge in what gave me a chance to explore.

AOT: Do you ever try to draw something that would challenge you, like something you have never drawn before?

GR : Yeah. In a way, I think I, what I try to do every time that I have a new book is trying to find like, which is the right visual voice for this book. So, I’ve been all the time trying like different art styles and to make the art evolve according to what the story is because  I’ve done things that are completely different from each other. And for example, I just finished an adaptation of the Island of Dr. Moreau, in which I try a completely new visual approach. And I used to live in a way that I never used before. And then you can compare that with what I did a couple of years ago with you need to leave on Slumberland, which I think probably has been like the most frightening project I’d ever tried. Because then you have to stand on the word at the reference work of Windsor McCay.

AOT That is a very big challenge.

GR: Yeah. So, I think that probably that was like the scariest challenge I have done. It’s probably the most exhausting book that I ever have drawn. I guess I must, like the lead up to the expectation of receiving about the world. Because there are always challenges. Yes, I need to feel every new book is a new challenge. Luckily, I’ve been able to escape from different genres and are also working with writers that have a very different approach to sorry.

GR: Yeah. This readership that has been incredibly loyal, to be supportive, and they are very excited about getting back to that world.

I want to thank IDW for allowing us to interview Mr. Rodriguez it was an honor and inspiring.

Check out the official trailer for Locke and Key below:  The series hits Netflix on February 7th:

The post Exclusive Interview With Artist Gabriel Rodriguez And The Official Trailer For Locke And Key appeared first on Age of The Nerd.