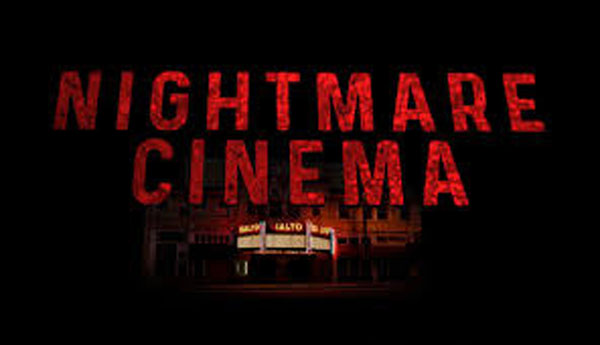 This past Christmas I treated myself and got a subscription to Shudder the thriller and horror streaming service. Shudder has a lot of treats to offer horror fans including the hit series Creepshow and Joe Bob Briggs Last Drive-In just to name a few.

The movies Shudder has to offer range from the supernatural to the slashers. One of the selling points in getting Shudder was the movie that I’m about to review called Nightmare Cinema. I’m a huge Mick Garris fan, and when I  heard about this film while listening to his podcast Post Mortem, I couldn’t wait to check it out.

Nightmare Cinema was the first film I watched on Shudder. The film is an anthology series that follows five strangers into an abandoned theater where they watch their deepest fears playout on the big screen. It was a treat to see Mickey Rourke playing the Projectionist who owns the twilight zone like theater and his different conversations with his victims

The film is a bloody treat for old school horror fans that miss the bleakness that the genre used to offer. It was fun to see a film go right for the gut, and not just give the audience a happy Hollywood ending that we all have come to accept. The directors of the film deliver the goods and the acting isn’t as bad as the circumstances they are put in.

If you like your horror bloody and your ending’s not so happy then Nightmare Cinema is a must-see film for you. Shudder was a great investment I can’t wait to see what the future holds for them.

The post Nightmare Cinema Delivers The Horror Fan’s Deserve To See appeared first on Age of The Nerd.