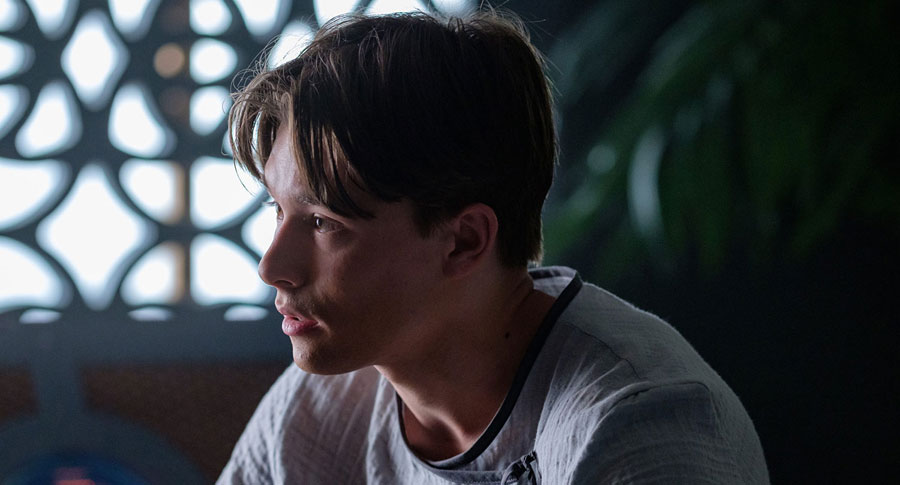 The Hulu Original series Utopia Falls has been gaining a ton of buzz as more and more people are tuning in to check out this fantastic genre-bending series. Utopia Falls features a unique concept for a series, as there is truly nothing else quite like it streaming these days. Overall, it is just a lot of fun (and the soundtrack is utterly fantastic)!

The premise of the show is a coming of age story where a group of teens in a distant future colony uncover a forbidden archive of historical, cultural, and musical relics. With the help of rap icon Snoop Dogg as the voice of the futuristic Siri, they use the power of music to ignite change in their reality to expose the truth.

We recently had a chance to catch up with Utopia Falls star Phillip Lewitski who plays the role of Apollo, a character that can be best described a quiet and calm natured dreamer, who works as a mechanic and brings his musical talents through drumming to the show.

We had a chance to catch up with Lewitski to, of course, talk about Utopia Falls such as what drew him to the projects, his character motivations and so much more!

When asked about already being a seasoned musician and what attracted him to the role in Utopia Falls, Lewitski tells us, “It was definitely the music, but also this kind of unique story and I had never read anything like it before … I remember when I first received the script and read it, it piqued my interest right off the bat because, as I said earlier, it was something I had never seen or read before, so that was definitely very attractive.”

Discussing with us about what he has learned about himself as an actor as he continues to delve into the character of Apollo, Lewitiski reveals, “Yes, for sure. I definitely had to explore some darker parts of myself, though, halfway through the season … I don’t want to say anything too much to spoil it all but … something happens that sweeps Apollo off his feet and there was a lot of research involved to see what that would look like and how that would feel. There were some things I had to explore for myself to get into that headspace. There were some discussions about things that I didn’t really know about myself throughout the course of the season.”

Lewitiski started out with a musical background with drumming in particular and talks to us about when he first discovered his passion saying, “My background is Mowhawk and so I didn’t grow up on a reserve or anything, but my mom would take me to these pow-wows and I remember the first time I witnessed one it really did change something inside of me … just to see the synchronization of the drummers and the dancers and the vocals all coming together as one in this big community that came together in celebration. Obviously, drumming is a huge part of that and I remember that I would go home and I would just start drumming on the table or get a steel bowl out the kitchen and start drumming on that. My mom saw that I was interested in that so she bought me a little drum and it just kind of went from there, but I would say the pow-wows really inspired me to get into drumming.”

Lewitiski went on to tell us about how he made the move into acting projects revealing, “My mom put into theater productions at a very young age and pretty much just from the few steps onto that stage in front of the live audience I fell in love with the craft. As I grew up my acting just transitioned from the theater to the screen and it went from there. It’s been a mix of music and acting as an art form for me, so it was really cool to incorporate both of those into Utopia Falls, as it is the first time I’ve ever done it in my career and bring both of my passions together.”

What is fantastic about Utopia Falls is that it is so different than anything we’ve seen on television before and the ending of season one certainly left us on a bit of a cliffhanger, so of course, we had to know if there were any updates or news surrounding season two. Lewitski tells us, “Not that I can speak of yet!”

We mentioned that it seemed that Apollo was not quite ready to give up on the revolution aspect of things just yet to which Lewitski replies, “Yes, yes, he is pretty strong-minded. When he gets set on something there is nothing that is going to get in his way to achieve what he wants and I think that will be a big part of what’s to come.”

Speaking about additional projects in the works, Lewitiski tells us, “I’m going to be shooting a feature film later this year and again I can’t give any details on that at this point, but it’s something that I’m really excited about and it speaks on some very important social issues that we are dealing with in today’s society and I think it has a very strong message behind it.”

When asked if he would ever plan to record and release music, Lewitski comments, “It’s funny you ask that because I was at Paramount music studios with one of the music producers from Utopia Falls last week and he was asking me the same question. I told him that acting has always been my front runner career-wise and I guess when life presents you with opportunities I’m not going to shy away from that but it’s not something that I’m actively pursuing.”

Lewitski spends a lot of time interacting and speaking with fans about a variety of issues they may be struggling with, so we were curious in what ways those issues speak to him on a personal level. Lewitski reveals, “I think that one of the most important messages on Utopia Falls that I really think people should pay attention to, especially the young adults, is that you should always question authority and people in power. You should always trust that feeling inside that’s telling you one thing or another and just because that person is older than you or holds more knowledge does not mean that they know what’s best for you. You are the only one that knows what’s best for you, so trust that! Always!”

Talking to us about his most memorable and most challenging moments on the set of Utopia Falls, Lewitski says, “I can’t really say what was the most challenging, because, again, spoiler (laughs) … but one of my best memories on-set was probably episode eight because of the drum sequence where just before I went on the stage I prayed for my ancestors to give me strength … to really just be there with them throughout that entire performance because I dedicated it to them. It was just a really powerful experience for me personally to shoot that scene. Normally there would be a lot of anxiety behind that because we were in quite a time crunch as we had rented out this massive stadium that holds twenty-five thousand people and we had two hundred and fifty extras and double the crew and we had a lot to shoot in a short period of time and all of that pressure just disappeared during that moment for me and it was an incredible experience.”

Being that we are AgeoftheNerd.com, we had to know what Lewitskit “nerds” out about in his spare time. He reveals, “I do really love history. I go back and read up on a lot of things that happened through history and I do love sci-fi as well. It was cool to be working with some of the producers from Stargate SV-1 and be part of the world of sci-fi is so cool!”

We highly recommend sci-fi fans to head over to Hulu and check out Utopia Falls which is currently available and streaming now!

The post Star Of Hulu’s ‘Utopia Falls’ Phillip Lewitski Reveals Details About His Character, Motivations And More appeared first on Age of The Nerd.