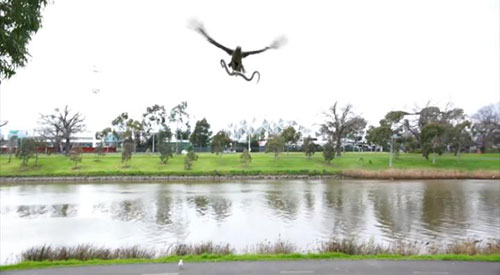 (PCM) The latest video to go viral purports to show a hawk tossing a rather large snake at a family who was picnicking in Australia, however upon further analyzation of the video experts are claiming that the video is actually a fake.

The video was originally posted by YouTube user Daniel Wong and shows a hawk swoop down and pick up a large snake in a Melbourne area park and then drop the snake right in the middle of a family enjoying a barbecue.  The whole ordeal looks absolutely terrifying however once experts began to look deeper at the video, which started gaining viral steam, they noticed some extreme inconsistencies.

The uploader, who claims to be a 22-year old college student say the video is real and shows an event that actually took place, but others disagree. They feel that the snake looks too large in the videos final show, whereas when the hawk is flying with it in the sky it is barely visible. Some photoshop wiz’s also noticed that the video appears to have been edited together because a layer can be seen.  Finally, many also question just why a snake of that size would be hanging out in the short grass in the winter time, it truly makes no sense.

It is also strongly rumored that the video could have been produced by a company called The Woolshed company who are responsible for producing several other viral videos. However the Australian Reptile Park claims that the video could indeed be real, as the hawk would have dropped the snake rather quickly if it had gotten bit and the snakes motions within the hawk’s talon appear to be legitimate.

What do you think?

The post Did A Hawk Really Toss A Snake At A Family? Experts Say No! appeared first on Weird But True News.