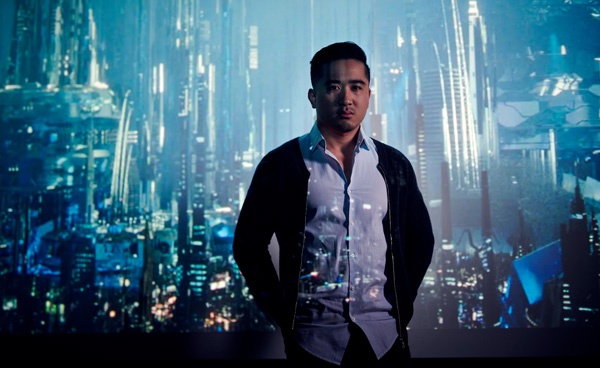 The Emmy’s are coming up soon and while the main focus is generally on the categories of Best Actor, Best Actress, Best Television Drama, Comedy, etc and award that is oftentimes overlooked by the general public, but plays a tremendously huge role within the television and film industry is those for VFX.

VFX (visual effects) is so incredibly important to help create the final product for nearly every film and television series you see, even if you are not consciously aware, they are there in nearly every scene and they take a tremendous amount of work to create, as everything must flow together seamlessly.

We were recently able to catch up Pixomondo’s VFX supervisor Nhat Phong Tran to speak about his work on the hit HBO series “Westworld” which has earned him an Emmy nomination, alongside “Westworld’s” overall VFX supervisor Jay Worth. Jay brought Nhat and the Pixomondo team on-board with “Westworld” in Season 2, and again for Season 3, so the two have a very close working relationship and it shows by the amazing VFX content they have collectively created.

NHAT PHONG TRAN: It feels like I’m working with the right people! (laughs)

How did you begin to get into the world of visual effects and begin working with Pixomondo?

I think it all starts in early childhood and maybe some people remember back then when there were little visual effects and you were really impressed with how it was done and how that was possible. You then start digging down the rabbit hole, you do some research and you look into that, you think about it and then you reveal or unveil that there is a whole world to this kind of stuff and to me what was so exciting about visual effects was that it is pretty much connected to everything such as art and science, technology, design … there’s so much involved even down to law-making and overall human behavior. All of that stuff flows into visual effects and when I graduated from high school, and I’m pretty sure a lot of people feel the same way, there are so many things that you want to do and most people tell you to do something that gives you a stable job and I am glad that I didn’t go down that path, but I thought it would be nice to do something that just covers everything and visual effects was the dream job!

That’s amazing! Was there a particular film sequence or television sequence that truly inspired or fascinated you?

Yeah, it was “Terminator 2” for me …I probably watched that movie a couple of hundred times and “Jurassic Park” was another one and “Back to the Future” those were all movies that expanded my horizon when I was a kid and I thought about what was actually possible. What you show on TV or what you show in a movie does not necessarily need to exist in the world.

When putting together the VFX scenes for “Westworld”, we see an incredibly futuristic version of the city of Los Angeles and it’s skyline, what was the hardest aspect of putting all that together?

I think the hardest part of it is not so much making it look photo-real, which was more like the technical part of the job, I think it was more to make it feel believable. Often with sci-fi or futuristic cities especially Los Angeles, they have a very daunting future to it … “Westworld’s” future of Los Angeles was not that far from our current future, so we have a good idea of the number of people … around 12 million that know the city very well and also internationally it is a very well-known city so that means whatever we add of change to it has to feel believable. Jonah’s [Nolan] vision of the future especially Los Angeles was inspired by Singaporean city planning and by a Danish architect Bjarke Ingels and he can kind of combine art and urbanism with nature very well in his architecture and incorporating that idea into Los Angeles as we know it now projected into the future that was definitely a challenge.

We have to look into zoning and which areas or pockets of the city would most likely evolve and rise up and which areas would remain residential and single-family homes, which areas would probably be bought out by the rich. We were researching Los Angeles real estate trends and making an analysis so that was a lot more of that subjective type of work that it took to feel right.

I would never even begin to imagine that the visual effects department would be going into real estate and things like that, it is mind-blowing!

That’s what I meant when I said that visual effects are connected to everything pretty much …even building codes, as we looked into those as well. For example how much of a landing would you need for stairs? I mean, anyone can build stairs, but for it to look real for a city in the U.S. they would need to follow certain standards. Even in the future, safety is still important. 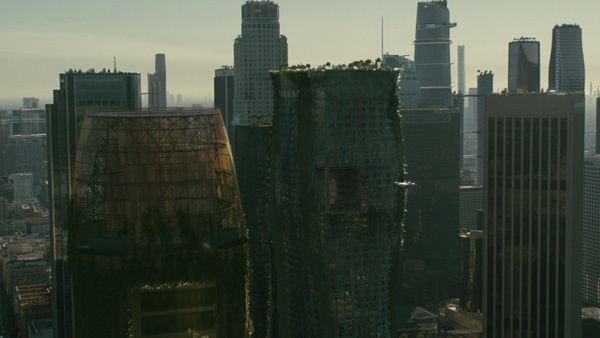 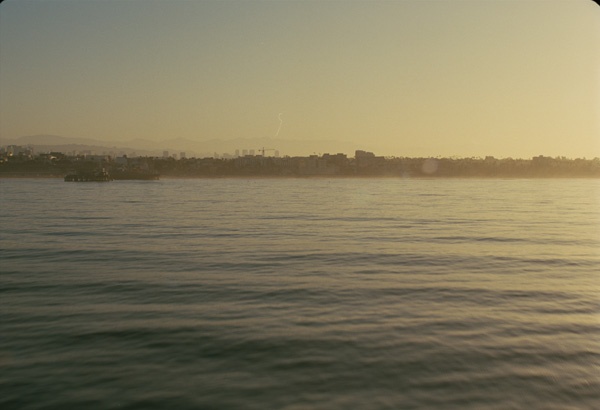 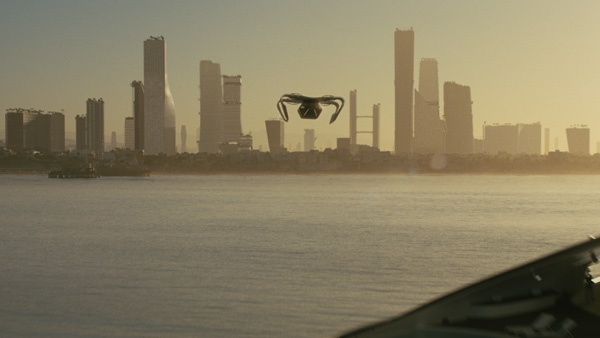 I am sure that you worked very closely with the writers and producers to help make their vision into a reality on-screen. How much input does everyone have?

We are absolutely driven by the art department and the creatives of the show and personally, I was in touch with Jay Worth who is the production supervisor, as he was the interface and counterpart for the visual effects side but a lot of all the ideas and designs all came from them. It took a couple of back and forths, of course, to get our ideas in sync, but it has been incredibly exciting to see the final product. Also, together with all the other departments working on this like how it was edited together down to writing the score and the grading has all been amazing.

I love it! I was recently reading about your work on the whole Zendaya room spinning sequence in HBO’s “Euphoria” and it was fascinating to learn how that all came together. Can you talk about that project?

It all started with David Van Dyke who is the production supervisor on “Euphoria” approaching me and saying the creatives have a vision for a new show with Zendaya and she’s at a house party and she’s intoxicated already and she does a line of coke and then after she gets out of the bathroom they want the audience to kind of feel her high with her pretty much. They were thinking about the room is spinning and she would be not obeying to the physics of the room and she would have her own gravity because it’s supposed to be very subjective. Just throwing these things out there we got that this was definitely going to be something unique. We thought it could be something like “Inception” but with “Inception” it was a different effect and the story point was different, here it was like she’s separated from the rest of the people in the hallway so how would you shoot that?

How would you have all the people walking around and talking and conversing while she is doing something entirely different? Just by dividing and conquering it, we knew we needed to have one take with just her where she does her own thing with gravity pulling just for herself, and then we would need to have another take with the other partygoers, but how would you build that? So, it was a lot of work with other departments and they built that thing in a very timely manner and we had a spinning hallway! We did one shot where she was in the spinning hallway and a couple of stunt people were strapped in and when I first heard that I thought they are never going to be able to hold their bodies straight while it’s 90 degrees or 180 degrees and they must have such a strong core as you can not tell that they were completely sideways or upside down. They were so impressive!

Zendaya, herself, did very good as well, not only can she sing and act, but she can also walk in a room that all the walls and the rooms are spinning. It is kind of tricky too because at some point she had to step over what was supposed to be a door to another room, so she was stepping into the door and almost fall through it, so we did that take as a separate take and the problem actually became for all of the extras in the hallway but having the same camera motion from the take with Zendaya. It has to be one to one because otherwise, you would see her sliding away from the people so what we had to do was camera track, which was a 3D track of the camera so that we know the position in the XYZ coordinate system at any point of the take and we feed that into a machine and it’s a gigantic machine that would easily kill you which easily replicates whatever camera motion that you feed into it. So, we prepped the data and we put it into the machine, but the machine is so big that you can’t use the machine in the set where the rotating hallway is so that meant that we had to build an exact replica of the same set where one wall is taken out just for that special rig to operate.

Wow! That is crazy!  I can’t even imagine all the details that went into executing that scene so flawlessly!

What has been one of the most challenging projects that you’ve taken on?

I think there are a lot of different tiers of challenges as I like to call them. There is the time crunch challenge, which every project has a little bit of it and the creative challenge, so I don’t think there has ever really been a most challenging project. Each project is challenging in a different way.

Do you have any upcoming projects in the works right now?

Yeah, I am working on “Orville” season three right now.

What is it like for you to be looked at as a mentor to the upcoming generation of VFX artists?

It’s very humbling if people consider me a mentor. When I was going to film school I was very inspired by people that were trying to transfer knowledge to a broader group of successors without being protective or secretive about their methods or what they’re doing. I took that as an example and I’m trying to spread knowledge and educate people and if they consider me a mentor and they think that what I’m saying or doing makes sense it’s really humbling for me, but it’s even more amazing to see that if those people make use of your knowledge and do something bigger and better.

The post Breaking Down VFX With Pixomondo’s Emmy-nominated VFX Supervisor Nhat Phong Tran appeared first on Age of The Nerd.