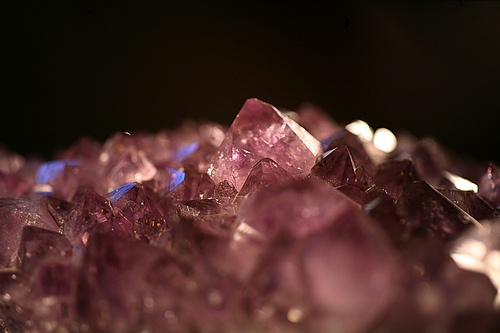 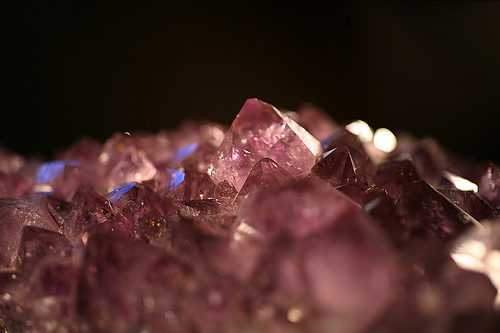 A birthstone is a special gem dedicated to each month of the year, often due to beliefs that a stone’s mystical power is stronger during its month, or that the stone possesses a virtue that can be given only to those born that month. The concept of the birthstone has been a part of many cultures for centuries. Many scholars agree that the tradition of birthstones started with the Breastplate of Aaron, a religious garment that was set with twelve various gems representing the twelve tribes of Israel, the twelve months of the year, and the twelve signs of the zodiac.

Wearing birthstones became popular in fifteenth century Poland, but at that time it may have been common for people to own one of each stone, and to wear each one during its particular month. An official list of birthstones was first defined in 1912 by the National Association of Jewelers in the United States, and this is known as the modern birthstone chart, the most commonly accepted list today. The traditional birthstone chart varies slightly, as it tends to include some societal birthstone traditions. The mystical birthstone chart comes from a Tibetan book and is more connected to the zodiac and healing powers of the stones. This list will focus on the modern birthstone list, and will include information regarding each birthstone’s color and composition, myths, beliefs, and mystical properties. 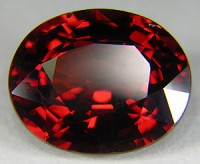 Garnet is a silicate mineral that comes in a variety of colors, but the one most traditionally associated with January is deep red.

The word “garnet” comes from the Latin word for “seed.” A myth regarding the origins of garnet is that of Persephone, the Greek goddess of sunshine, who was captured by the god of the underworld, Hades. When he released her, he gave her a handful of red pomegranate seeds to guarantee her return.

Because of its color, garnet is considered to have healing properties connected with the blood, and is said to purify, vitalize, and regenerate the circulatory system. Garnet is also said to inspire romantic love, passion, sensuality, and intimacy. It also believed to contribute to success in business by invoking positive thoughts, inspiration, energy, and self confidence. The wearer is said to become more productive and achievement-oriented. These attributes of garnet will also help ward off depression. 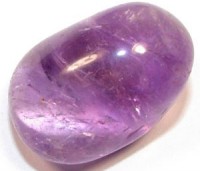 Amethyst is a variety of quartz that ranges in color from pale violet to dark purple.

A Greek myth about amethyst involves Dionysius, the god of wine, who was insulted by a mortal. He created tigers that would act out his revenge on the next mortal to cross his path, who happened to be a beautiful maiden named Amethyst. The goddess Diana protected her by turning her into a quartz statue, and in remorse, Dionysus wept tears of wine, which stained the quartz purple.

Because of its association with the god of wine, amethyst is also commonly associated with sobriety, traditionally worn to guard against drunkenness. It is said to keep the wearer thinking clearly as well as improve blood circulation to help alcohol leave the system. The stone will also bring peace and tranquility to the wearer and is often used as a stress reliever. It will also guard against nightmares and increase spiritual awareness. Amethyst is often used in meditation and is said to enhance psychic abilities. 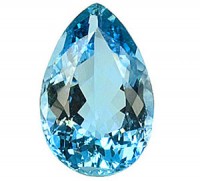 Aquamarine is a light blue-green stone of the Beryl family.

Because of its name and color, aquamarine is said to protect those at sea. Sailors would carry aquamarine stones carved with the image of Neptune, god of the sea, in exchange for protection from the elements. Aquamarine was also thought to be the treasure of mermaids, and its mystical properties are said to strengthen when immersed in water.

Aquamarine calms the wearer by soothing the central nervous system, and alleviates fears and phobias. As a result, aquamarine is often associated with serenity and tranquility. Also, aquamarine aids in the making of new friends and inspires creative self-expression. It gives the wearer courage and helps them use their inner power wisely. 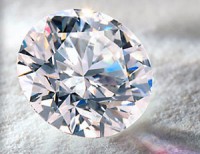 Diamonds are composed of pure carbon and are the hardest of all known minerals. They occur in a variety of colors, but clear or white diamonds are most often used, as colored diamonds are rare.

There are many legends surrounding the origin of diamonds. They were thought to be either the tears of God, splinters from falling stars, or the result of lightning striking rock. Cupid’s arrows are said to be tipped with diamonds.

Commonly used today in engagement rings, diamonds are associated with love and eternity. Innocence and constancy are also attributed to the stone. Healing properties of diamonds include the amplification of thoughts of the wearer. Diamonds were also once thought to protect from poison, and were worn to promote detoxification, and are especially good for healing coughs and mucus problems. 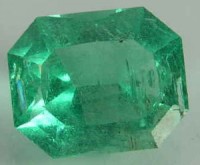 Emerald is a variety of beryl ranging in color from light to dark green.

The Ancient Egyptians believed that emeralds were a gift to them from the gods, and that its rich green color symbolized springtime and eternal youth. Emeralds were Cleopatra’s personal favorite, and she was known for wearing the stone and gave gifts of emeralds carved with her likeness. In fact, the now-exhausted emerald sources in Egypt are called the Cleopatra mines.

Emeralds are a healing stone, credited with aiding fertility and improving eyesight, curing diseases of the eye. It also helps to heal depression and insomnia, bringing tranquility to the mind of the wearer as well as peaceful dreams. Emeralds are also associated with hope and the preservation of love. The wearer of emerald is also said to have enhanced ability to see into the future, considered by many to be the stone of prophecy. 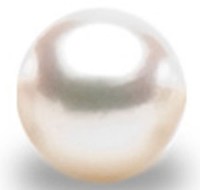 The pearl is an organic matter derived from oysters and mollusks, often white or black in color, although they can also be pink, gold, green, or purple.

In some legends, pearls are said to have formed when dewdrops fell from the heavens and landed in mollusk shells. Others say they come from the tears of spirits of gods, while some Asian myths state that pearls fell from the sky when dragons fought in the clouds. Because it comes from the sea, the pearl is also said to protect divers from sharks.

The shape and luminescence of the pearl have caused it to be linked to the moon, and it is thought to help balance the emotions. The pearl is a symbol of chastity, purity, and innocence. As a result, it has often been worn as jewelry by brides and sewn into wedding gowns. Pearls inspire honesty and integrity, and help get the wearer in touch with the simple things in life. They also aid in focus, concentration, and wisdom. 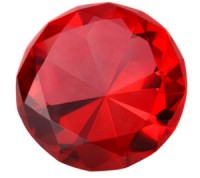 Rubies are formed from the mineral corundum and are bright red, brownish red, or red-violet in color.

Many legends hold that, when possessed by its rightful owner, a ruby would darken when danger was present. Also, the beauty of a ruby is thought to be dependent on its owner – a neglected stone will lose its brilliance and color. 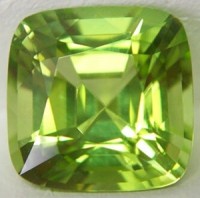 Peridot is a yellow-green gemstone of the olivine mineral.

Called the “gem of the sun” by ancient societies, peridot was believed to possess its own inner light that would glow in the dark, aiding miners in finding the stones at night so they could harvest them during the day.

Peridots have many healing properties, said to balance the glandular system, aid in tissue regeneration, and enhance the wearer’s recuperative abilities. It is strongly associated with purification, renewal, and growth. Peridot also increases intuitive awareness and stimulates the mind. This gemstone is also used to alleviate stress and negative emotions such as anger, irritation, jealousy, and fear. Peridot also helps protect against evil and night terrors. 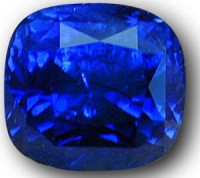 Sapphires are of the mineral corundum, the same as rubies. They can come in many colors, although the most prized shade is a deep blue.

Ancient Persians believed that the sky’s blue color was caused by the reflection of a giant sapphire, upon which the earth rested. It was also believed that the commandments sent to Moses were written on sapphire tablets.

Some believe that that sapphires aid in foresight and predicting the future. They are also said to promote financial rewards, and a necklace of sapphires is supposed to cure a sore throat. Sapphires are strongly associated with mental clarity, inner peace and happiness, and are believed to help with communication, insight, and perception. 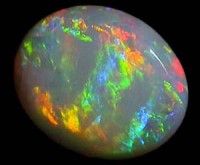 Opal is a very fragile silicate that comes in many colors, with a luminous quality that reveals a variety of internal colors when it reflects the light.

Australian aboriginal legend has it that the earth’s creator came to earth on a rainbow to bring peace to all humans, and the rocks where he touched the ground turned into opals, shining with the light and colors of the rainbow.

Many believe that opals clarify the mind by amplifying and mirroring feelings. They help to bring buried emotions and desires to the surface to help the wearer deal with them. Opals also enhance the memory. Opal also aids visualization and imagination, bringing good dreams to the wearer. The opal is also said to inspire spontaneity and creativity.

Topaz is a silicate mineral. It comes in many colors, but topaz gems of a yellow-gold color are most commonly used as the November birthstone.

Ancient Egyptians believed that topaz’s color was caused by the touch of the sun god Ra. The Romans also attributed the stone to their sun god, Jupiter.

Topaz is a warming, soothing stone with many healing properties. It helps aid digestive problems and alleviates nervous system stress. It also gives the wearer mental clarity and wards off insomnia, worry, and mood swings. The stone is also associated with positive energies such as generosity, humor, optimism, and creativity. It is said to inspire and bring confidence and stamina to the wearer, as well as calm a bad temper. 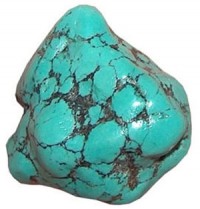 Turquoise is a soft, opaque mineral ranging in color from blue to green.

Turquoise, according to Navajo legend, was believed to be part of the sky that fell to the earth, its blue-green color representing the connection between earth and sky.

Healing properties of turquoise include anti-inflammatory and detoxifying effects, aiding in the alleviation of rheumatism and healing infection. Turquoise also helps to relieve pain and relax cramps. Turquoise is also said to foster empathy, sensitivity, and positive thinking. It is also believed to bring wisdom, balance, and serenity to the wearer.

The post Birthstones and Gemstones appeared first on Weird But True News.