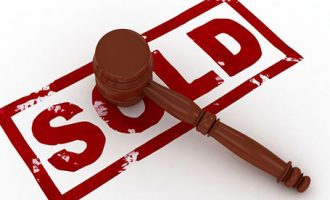 (PCM) We have always gotten a case of the giggles when listing the incredibly fast-paced chant of an auctioneer. Upon first listen it can truly sound like nothing more than a bunch of gibberish, however, the mystery has now been solved and someone has finally broken down just what the auctioneer is actually saying. Surprisingly they are normal words, just said a ridiculous speed. Barry Baker of Ohio Real Estate took a few minutes to create a rather informative video breaking down (in normal speed) just what is flowing from the mouths of most auctioneers.

It’s hilarious because after watching the video we can actually begin to pick out a few of the words a bit more clearly even when the auctioneer is spitting them out at rapid pace. Baker says that the auctioneers use a lot of filler words such as “bid”, “dollar”, and “now” which can sound a bit jumbled when spoken at fast paces.

You can read Baker’s auctioneer speech below to get an even better understanding:

Well, thanks for clearing that up!

The post Did You Ever Wonder Just Want An Auctioneer Is Saying During His Chant? It Actually Isn’t Gibberish! appeared first on Pop Culture News.