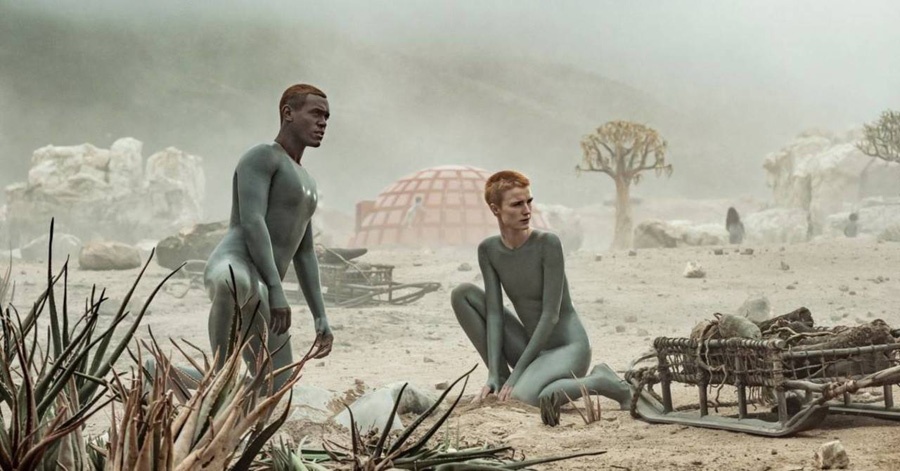 HBO Max surely has a hit on their hands with the upcoming premiere of Raised By Wolves! The show was created by Aaron Guzikowski and Ridley Scott and focuses on the relationship between androids and humans after mass devastation has taken place on Earth.

Upon watching we found ourselves immediately engrossed with the story and while it is chock full of science fiction elements the show itself is far from your typical sci-fi fodder. There is a much deeper thread that runs throughout this series, as it focuses on various aspects of human relationships, survival, religion and beliefs and so much more.

It was also refreshing to watch a show that always keeps you guessing, as of right from the start you can never be just too sure of who is the hero and who is the villain and we found ourselves analyzing each and every detail looking for those answers, which are never made completely clear, as there are always two sides to every story.

We recently had a chance to catch up with series stars Amanda Collin (Mother) and Abubakar Salim (Father) to share with us some inside insight into the series, working with Ridley Scott, their character motivations, and more!

Q: I think, Amanda [Collin] after watching the series, I know what I want my new superpower to be!

Both of you were able to find a way to tap into yourselves as actors and be able to play emotion without emotion as android characters, can you talk about that, and was it a challenge?

ABUBAKAR SALIM: I don’t know if it was a challenge, as it felt exciting, as the idea of almost feeling for the first time and trying to portray that and I think that was what was really exciting about playing this A.I [Artificial Intelligence] … playing this A.I. who is programmed to be a parent so that must mean he must feel empathy and nurturing. What does that mean? How does that feel if your child does something you don’t want them to do. It was exciting exploring that because there was no right or wrong way of doing it … it just was! That was what was so brilliant about the world that was presented to us.

AMANDA COLLIN: Also, so much was given with the suits and I think that was a big help too because we looked so android-like that we had the freedom to play more emotion without it being human. Sometimes it would be too emotional and then you would turn it down. I think all of my scenes are so emotional because it is emotional stuff that Mother is going through all the time. We are sort of like teenagers and we’re discovering who we are while we’re raising kids and it’s such an interesting territory. There is so much brilliant stuff to play with like when Spiria passes away there is grief in mother both because of losing a child and the last girl, but also because of her failure in her mission. I think that was so interesting to play with because she is programmed to do something and she keeps failing and to play with that and it might look like just regular grief or whatever, but I think there were so many layers that we could play with and pull up and work on that it made it just the most interesting character to work with ever.

Q: How would you best describe Mother and Father’s parenting style?

AMANDA COLLIN: That sums it up!

ABUBAKAR SALIM: I guess there really is no right or wrong way of raising children and I think that is what is interesting about Mother and Father’s discovery, as you have Father on one hand trying to teach the children how to survive or how to manage and then you have Mother teaching them about education and about the world before and the mistakes that were made. I think one of those things where you are constantly adapting and evolving with the children. It becomes very interesting where in the first episode we have our original children and the original children are new and fresh, as they are of this world and now after the event of losing them you then have to deal with children who are coming already with history and baggage and that evolves how you are supposed to raise them. There is no one way of putting it, as it is constantly evolving.

Q: Can you talk about the sci-fi elements of the series and how at times it almost doesn’t feel as if it is a sci-fi series?

ABUBAKAR SALIM: Yes, we had the suits and we had to imagine seeing ships and stuff, but the show wasn’t about how sci-fi and awesome it was, it was about human connection. That is what I think was really brilliant about this was that the futurism and advancement were almost secondary to the actual idea of children and parenthood and that exploration of relationship. It felt almost supplementary to the world in which we were in!

Q: What challenges did you face portraying androids and also with Ridley Scott directing the first two episodes, how did you enjoy working with him to bring the characters to life?

AMANDA COLLIN: When you come to South Africa and you meet the person that you’re going to be spending the most time with on set and it’s Abu that right there is a big load off your shoulders because we were able to have fun and talk … so much of doing our work and so much of the blocks that could happen is fear and the fear of not being good at what you do, but it is always so helpful to turn that into play and have fun and discover. Then with Ridley directing the first two episodes and setting the tone of that … it was such a dream … it felt so easy, to be honest … so relaxed and down-to-earth, as we are all just discovering this together. We had tons of fun!

ABUBAKAR SALIM: It was a lot of risk-taking because it felt safe to take risks and discover and I think yes, it was a world that was already rich from Aarons writing and Ridley’s visual touch, but we were all aiding the building of it as well and discovering. Working with Amanda as well, you could make mistakes … you didn’t have to be perfect and it was really lovely to be in that environment.

Q: Can we talk a bit about the dynamic playing throughout the series of not really knowing who is the hero and who is the villain? What has that been like to explore?

AMANDA COLLIN:  Excuse me!! (laughs) We didn’t know either! We just shot away …for Mother, at least, it goes very well with the character’s arch to keep discovering what’s going on. She takes a baby step constantly into the world of her secret unknown world inside and it’s such a fascinating move for Mother, but it’s also a fascinating move for humans when they have the curiosity and courage to do that … you grow up and you find a way to live your life but at least I’ve talked to many friends or myself as in your 30’s there comes a point where you are like ‘who am I again?’ and if you have the courage to open up again and look inside sometimes you find bad stuff and I think that is very important to look at actually …I’m being a little cryptic!

ABUBAKAR SALIM: From the outside perspective of reading the scripts and seeing that journey, it generally felt like I didn’t know who the hero or the villain was and I think that is what was really exciting. It was Aaron’s writing and how the actors portrayed their characters, as it is like every action is justified and I think that is what’s brilliant about this show is that there are no archetypes. It is about feeling and emotion as well as actions and reactions. That is what is really cool and then characters start coming out of these actions and reactions.

The post Raised By Wolves Interview: Amanda Collin and Abubakar Salim Give Us The Inside Scoop On New HBO Max Series appeared first on Age of The Nerd.