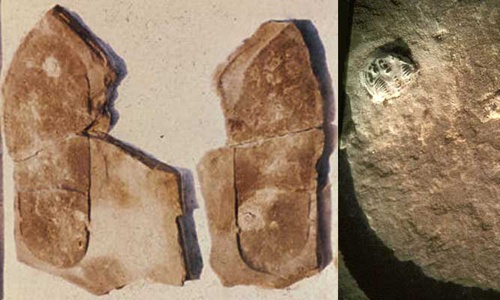 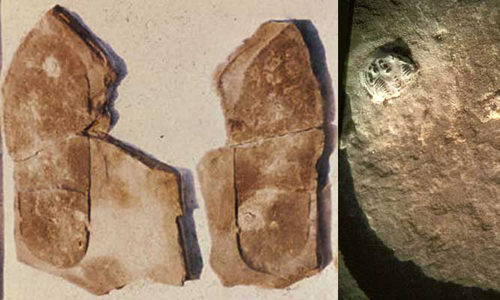 There is definitely a bit of controversy surrounding Meister’s find making a bit hard to determine how much is fact and how much is fiction when looking at the overall story.  Yes, Meister did indeed discover a fossilized shoe imprint with a trilobite in it when he was out rock hunting near Delta, Utah, however it is the exact age of the fossil that has caused a bit of a debate among historians, as many claim that 500 million year time frame is a bit exaggerated.

When Meister discovered the fossil it was authenticated by Dr. Hellmut Doelling of the Utah Geological Survey, however he would not necessarily call Meisters’ discovery a human sandal print, but did authenticate the trilobite trapped inside. According to Factfictionandconjecture.ca, “On or around July 20, 1968, “flood” geologist Dr. Clifford Burdick  visited the site. He quickly homed in on an impression approximately 6 inches long, which he declared to be from a child wearing moccasins because the toes were barely visible, further noting that the footwear must have been new because the toes were splayed as though only recently confined.

So is William J. Meister’s footprint proof that time travel is a reality, proof that mankind existed hundreds of millions of years earlier than is presently excepted, proof that aliens visited and walked the Earth at the dawn of time, proof that creationists are correct and mankind and dinosaurs et cetera co-existed, or is it simply proof that shards of rock can sometimes assume the shape of a sandaled human foot?”

This definitely poses some interesting questions regarding the authenticity of Meisters find, as well as, the findings of Dr. Doelling as well. What we can definitely say for sure, is that the trilobite is real, but the sandal may just be a rock formation that happened to form in the shape of a sandal. It is definitely not likely that man would have roamed the earth at the same time as the trilobite, as that would change just about everything we know about human evolution’s time frame to this very day.

The post The ‘Meister Print’: Fact Or Fiction? appeared first on Weird But True News.