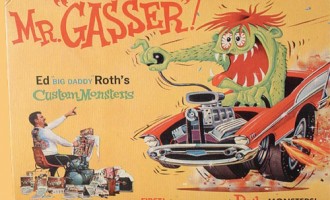 Ed “Big Daddy” Roth (March 4, 1932 – April 4, 2001)
By 1958, as described on his official website, “Ed became Ed “Big Daddy” Roth, a hot-roddin’, gear head, mad scientist, and struggling artist who financed his inventions by selling drawings and t-shirts at drag events, fairs, and car shows. Big Daddy Roth would draw cartoons of monsters that he created and pictures of cars, but when he personally airbrushed t-shirts with the monsters driving the cars, people went crazy and would line up at his booth.” By the late 1960s, he became friends with several ‘outlaw biker gangs’ and they influenced his style; he added the ‘Iron Cross’ to his repertoire and took/sold pictures of himself and the bikers at road and car shows. Although he did periodically pay some of his subjects, many felt he was taking financial advantage of them. They eventually attacked his garage, gang style, and Ed suggested that he and the gang president settle the fight one-on-one. Big Daddy won the fight, helped the other guy up, and later took most biker art and memorabilia out of his life. In his decade of prominence, he was able to represent the anti-establishment very well, yet at the same time achieved incredible mainstream success in his field(s).

The car the T-Birds built in the musical Grease (Greased Lightning) would have been a K Kar. The Munstermobile (by Barris Kustom, 3 Model T’s and a hearse) and even the 1966 Batmobile was 1955 Lincoln Futura bought for a dollar ($1) from Ford by George Barris of Barris Kustom City a few years earlier. The story of how it was recently found and restored by the team at Galpin Auto Sports.