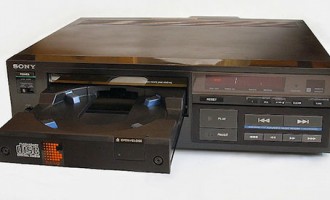 (PCM) Despite the fact that the CD player may soon very well be a relic, it’s invention changed the course of musical history and the way that music fans around the world were able to experience their favorite tunes. It was on October 1, 1982 that Sony released the very first commercial CD player called the CDP-101 available only in Japan for approximately $1,600 dollars. In the years that followed, the CD players popularity would explode and soon millions of these compact music playing devices would be sold worldwide.

The Philips company also developed their own version of the common CD player, as they shared in the discovery of the technology with Sony. Their CD100 player was released in November of 1981, still only in Japan. It was not until March 1, 1983 that Sony was finally able to begin selling their CD players to a mass audience across the globe. Early CD players were massive or shelve top units and it wasn’t until 1984 that Sony unveiled the small and highly portable Discman.

Once the Discman arrived on the scene and CD players were becoming standard in the majority of automobiles the demand for cassette tapes which had overtaken vinyl diminished significantly.  Within five years of being on the market, the CD player completely overthrew cassette tapes and players altogether. It was the addition of the “skip” button on standard CD players that truly sealed the fate for both cassette tapes and vinyl, as with the later you had to either endlessly fast-forward or rewind or keep adjusting the record players needle to find one particular track on an album you were looking to play.

In recent years the CD player has been slowly replaced by Mp3 and other digital music players. CDs and CD players are viewed as being too bulky and a standard CD player can only spin one disc at at time, where as a digital music player can hold thousands upon thousands of songs all in one place.  It seems that within the next few years the beloved CD player will suffer the same fate as both cassette tapes and vinyl, although vinyl has definitely made quite a bit of resurgence in the past year or so. Only time will tell we suppose, but something tells us that the CD player will most likely not be making the same sort of resurgence as vinyl in the years to come.