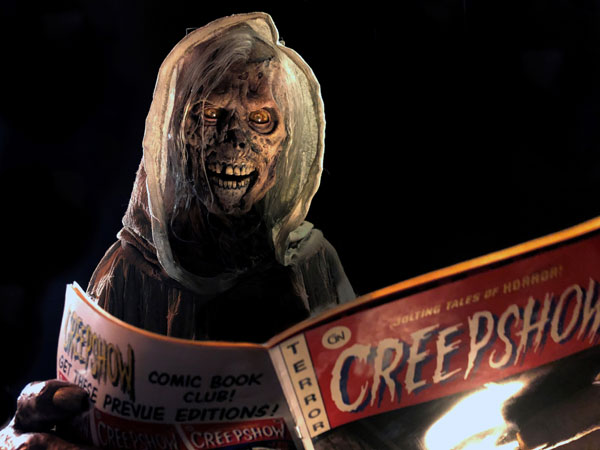 Halloween is right around the corner, which is a treat for horror fans.  With Halloween comes lots and lots of scary movies. One of my favorite horror movies from the 80s regularly plays around this time of year is the movie Creepshow. The film was directed by George A. Romero, the legendary director who brought zombies to the mainstream with Night of the Living Dead’s release.

Creepshow came out in 1982 and has since become a cult classic. Stephen King wrote the film and also starred in one of the five stories featured in the movie. King overacts in the segment and steals the show ” The Lonesome Death of Jordy Verrill.” The story follows a not so smart man named Jody Verrill, who watches a meteorite crash land on his farm. Jody touches the fallen meteorite to bring it to the local university to get some money to pay off his bank loan. After touching the meteorite, Jody slowly turns into a giant weed.

Before fully turning into a weed, Jody sits down and watches a wrestling match on TV from the 1980s featuring WWF Champion Bob Backlund vs. Afa “Wild Samoan #1”. During that match, the man doing the commentating is Vince McMahon, who only a few short years later will bring the WWF into the mainstream.

The second season of Creepshow will be returning later this week with an animated episode directed by Greg Nicotero. The two featured stories were written by Stephen King and Joe Hill. Check out the trailer below.

The post That Time Stephen King And Vince McMahon Were In The Same Movie Together, Well Kind Of appeared first on Age of The Nerd.