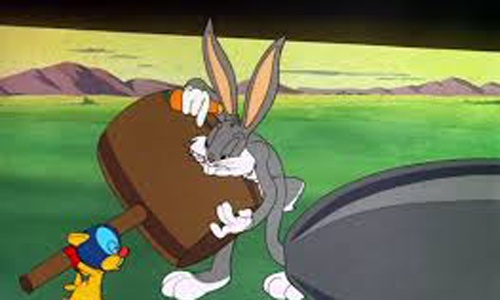 (PCM) The Merrie Melodies/Looney Tunes cartoon character is one of the most widely recognizable throughout popular culture and around the globe. Bugs Bunny has been in more films than any other cartoon character and has also earned the rank of being the ninth most portrayed film character in history.

Bugs Bunny has appeared in numerous television shows, as well, and even managed to nab his very own star on Hollywood’s Walk Of Fame. Not too shabby, eh, Doc?

Bugs Bunny appeared in public for the first time on July 27, 1940 in a Tex Avery directed cartoon called “A Wild Hare”. Bugs was an animated character created by Leon Schlesinger Productions with a voice-over by Mel Blanc who was  known as the man of a thousand voices. The production was a great success, and created an immediate demand for further Bugs Bunny appearances.

Bugs Bunny’s iconic name, catchphrase, and mannerisms are based on scenes in a 1934 movie called “It Happened One Night”. In it, Clark Gable smacks on a carrot while talking with his mouth full, makes up a person named “Bugs Dooley”, and is offhandedly called “Doc.”, it should also be noted that in addition for being the influence for the iconic Bugs Bunny character, the film “It Happened One Night” was also the first film to feature a shirt-less male lead on-screen. It would not be for another two years that men were allowed to go topless on the beach!  Now, back to Bugs Bunny!

Much of the characters appeal had to do with the fact that he could speak to both children and adults equally, as his antics delighted everyone and closed a generation gap. He became the main character in Merrie Melodies and the Looney Tunes series producing rising national and international fame and operating under the Warner Brothers Cartoons banner.

The popularity of Bugs Bunny continues to this day!  The character has starred in over 175 films and as been nominated for two Academy Awards. Bugs Bunny will always continue to be one of the world’s most beloved cartoon characters!