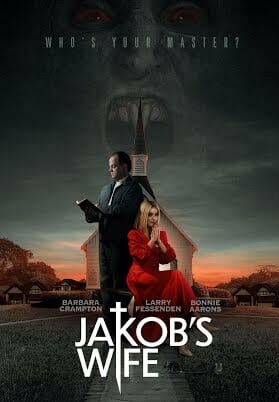 If you are a fan of vampire films Shudder has a treat for you. Landing on the horror streaming service is Jakob’s Wife. The film stars the beautiful Barbara Crampton who is no stranger at getting bloody. Crampton stars as a bored house wife named Anne who is married to a small town minister. After an encounter with “The Master” Anne starts having a new sense of power and a bit bolder, but the change comes at the cost of a high body count.

The film was produced and directed by Travis Stevens with a screenplay by Stevens, Kathy Charles, and Mark Streensland. The film also stars Larry Fessenden as Pastor Jakob, C.M. Punk, and Bonnie Aarons. So for a bloody good time be sure to check out Jakob’s Wife streaming on Shudder starting tomorrow.

Check out the official trailer below of Barbara Crampton and Larry Fessenden vampire film ‘Jakob’s Wife’ below:

The post Jakob’s Wife Lands On Shudder Tomorrow appeared first on Age of The Nerd.