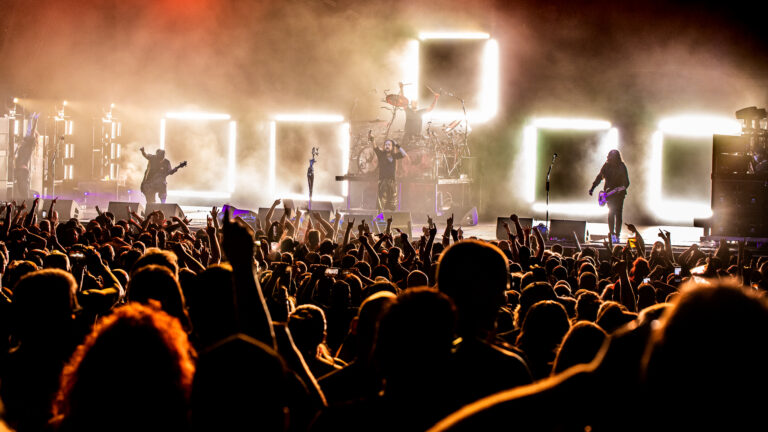 Both acts are proving their staying power.

After a long absence from the stage, hard rock mainstays Korn and Staind are trekking across North America on their 2021 tour.

Along with noisy duo ’68, the bands are making up for lost time in a big way. Korn are finally getting to properly support their 2019 effort The Nothing. The album was a big commercial success, peaking at No. 8 on the Billboard 200, No. 2 on Billboard Rock Albums and No. 1 on Billboard Hard Rock Albums. Staind reunited back in 2019, and were set to play Epicenter on May 3, 2020, but the performance never happened due to the onset of the COVID-19 pandemic.

Now, both acts are back in action playing to pack houses across the country.

Riffy rock duo ’68 kicked off the evening with a punchy set. They showcased their new album Give One Take One which came out on Cooking Vinyl back in March. Suited up in formal attire, guitarist Josh Scogin and drummer Nikko Yamada rocked out with a banner that said, “Rock and Roll Is Here To Stay.” It’s a sentiment that echoes with rock and metal fans everywhere, especially right now.

Staind were one of rock’s most reliable acts in rock for over decade after the turn of the century. Last night, they focused on their multi-platinum landmark album Break The Cycle, performing five songs from the record. Highlights included “Raw,” “Right Here,” “Outside,” “Crawl,” “For You,” “Fade,” and others. They closed out the set with their seminal “It’s Been A While” and their breakout pile driver “Mudshovel” from 1999’s Dysfuction which garnered massive applause.

Formed in 1995, Staind has released seven studio albums and eight Top 10 singles, selling over 15 million records worldwide. The album Break The Cycle, released in 2001 and RIAA certified 5x platinum, featured the smash single “It’s Been Awhile,” one of the most played songs in modern rock history, spending 20 weeks at No. 1. In 2019 after a five-year hiatus, Staind reunited for some unforgettable festival performances, and a hometown reunion show at Foxwoods Casino in Mashantucket, CT where their new album, Live: It’s Been Awhile was recorded.

As Korn’s massive banner featuring their iconic logo dropped, the band immediately began to brutalize the crowd with “Insane.” From there the launched into their 199 smash hit “Falling Away From Me” followed by “Here To Stay.” The latter is a reminder that Korn is truly not going anywhere. Just before the pandemic, the band released their 13th studio album. The COVID-19 pandemic put a halt on the band’s promotion of the record, but this tour marks the band’s return to the road and serves as a metaphor that they are truly hear to stay as the close in on three decades as a band.

Other highlights from the set included “Got The Life,” “Freak on a Leash,” “You’ll Never Find Me,” the ultra-heavy “Coming Undone,” their latest banger “Cold,” and others.” The encore kicked off with an epic medley of “It’s On!,” “Trash,” “and “Did My Time.” “Twist” and the rare gem “A.D.I.D.A.S.” followed. They wrapped things up with their iconic hit “Blind.”

Korn are still one of the most dominate live forces in music. Over the course of their career, they’ve not only been innovators but adaptors as well. They’ve reinvented themselves and put their spin on current trends. Korn have always remained relevant while remaining true to themselves at the same time, and there’s something to be said for that.

The tour wraps up at the Dos Equis Pavilion on September 21 in Dallas, TX. Tickets are on sale now at www.livenation.com. Korn and Staind will perform at Louisville, Kentucky’s Louder Than Life Festival on September 23.

The post Korn, Staind Are Making Up For Lost Time On 2021 Tour appeared first on The Rock Revival.