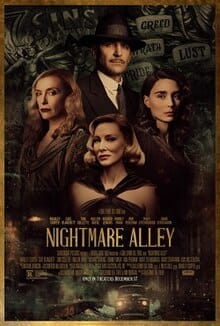 The film will star Bradley Cooper, Toni Collette, Cate Blanchett, and William Dafoe. The film follows an ambitious carny (Bradley Cooper) with a talent for manipulating people with a few well-chosen words hooks up with a female psychiatrist who is even more dangerous than he is.  Checking out the trailer the film looks like a mix of horror and a psychological thriller.

This film had a lot of hurdles getting out, and were glad that it’s finally hitting the theaters. The film has an all star cast, and with Del Toro behind the camera it is surely going to be a must see his holiday season. The film is a remake of the cult classic 1947 film of the same name.

Check out the trailer below.

The post Guillermo Del Toro And Bradley Cooper Will Bring You To Nightmare Alley This December appeared first on Age of The Nerd.