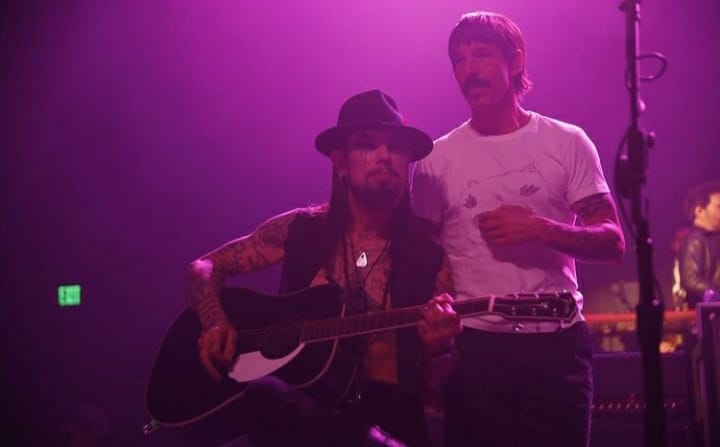 The former bandmates performed at the Above Ground Benefit Concert

Last night, Red Hot Chili Pepper frontman Anthony Kiedis performed with Jane’s Addiction guitarist Dave Navarro at the Above Ground Benefit Concert. It was the first time that the one-time Red Hot Chili Peppers bandmates had shared a stage since 1997. Check out their performance of Lou Reed’s classic hit “Walk On The Wild Side” below.

“It’s been a very long time since I performed with my brother Anthony,” Navarro said in an Instagram post. “What a magical night. Thank you so much for coming out and supporting [Above Ground] my friend!”

Kiedis was a surprise night-of addition to the star-studded lineup.

Navarro joined Red Hot Chili Peppers in 1993, following the first demise of Jane’s Addiction and the departure of RHCP guitarist John Frusciante. In 1995, the Chili Peppers releases One Hot Minute with Navarro. The title is ironic, since that’s about how long Navarro lasted.

Frusciante would return, Jane’s Addiction would reunite, and the rest is history.

Red Hot Chili Peppers are embarking on a massive world tour in 2022. It is the band’s first tour since parting ways with guitarist Josh Klinghoffer back in December of 2019. Shortly after, they reunited once again with Frusciante. A few months later, the Chili Peppers performed with Frusciante at the Tony Hawk Foundation’s memorial concert for Andrew Burkle.

John Frusciante was a member of the Red Hot Chili Peppers for their 1989 outing Mother’s Milk and their seminal 1991 album Blood Sugar Sex Magik, which celebrates its 30th anniversary this year. He left the group but would return in 1998 to play on Californication, By The Way, and Stadium Arcadium, before exiting again in 2009.

Next year, Jane’s Addiction will be a featured act at several huge festivals including Lollapalooza in Chile and Argentina, as well as Welcome To Rockville in Florida.

The post Anthony Kiedis and Dave Navarro Share A Stage For The First Time Since 1997 appeared first on The Rock Revival.