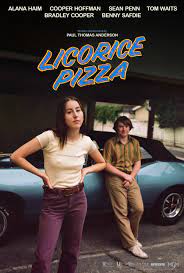 Bradley Cooper and Sean Penn are movie stars who share a great admiration for each other, and it took a great director to bring them together. That director happens to be Paul Thomas Anderson’s whose latest movie, ‘Licorice Pizza’ is now playing.

‘Licorice Pizza’ is a drama-comedy coming of age story. It revolves around Alana Kane and Gary Valentine growing up and running around and going through the scary thing called first love in the San Fernando Valley in 1973. Anderson also wrote the film. The film is currently playing in select theaters.

Bradley Cooper has always looked up to Sean Penn and was even filmed on Inside the Actors Studio back in the day asking him a question. And when Cooper directed A Star Is Born, Penn went on his little press tour promoting how good the movie was and put Cooper over. And now they’re finally in the same film together. Thanks, Paul.

The post Licorice Pizza Finally Brings Bradley Cooper And Sean Penn Together appeared first on Age of The Nerd.