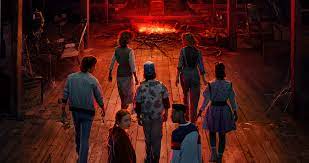 It had been one heck of a run for Stranger Things. The hit show which premiered way back in the summer of 2016 will be back on Netflix for a fourth season. And according to Netflix the season will be comprised of two parts. And as fans of the show we look forward to seeing what the kids from Hawkins, Indiana have been up too since we last saw them.

Stranger Things revolves around a small Indiana town in the mid 1980’s, a group of young friends witness supernatural forces and secret government exploits. As they search for answers, the children unravel a series of extraordinary mysteries.

Episodes 1-5  will arrive on Netflix on May 27 while episodes 6-9 will follow on July 1. This will mark the first time that the streaming service has split a season of Stranger Things ,which should give fans much to talk about. Little is known of the plot of season four, but it looks as if a lot of the characters from the past will be returning including  Dr. Brenner who was behind a lot of the mysteries in the town.

The post Stranger Things Season Four Will Return This Summer With A Split Season appeared first on Age of The Nerd.