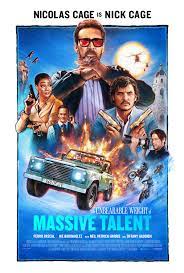 Nicolas Cage is a very busy guy when it comes to acting. Cage has been a staple of Hollywood since the eighties. And with so many movies and roles behind him, it was only a matter of time before someone got the idea to make a story about the actor portraying himself. Hence the movie ‘The Unbearable Weight of Massive Talent’.

Unfulfilled and facing financial ruin, actor Nick Cage accepts a $1 million offer to attend a wealthy fan’s birthday party. Things take a wildly unexpected turn when a CIA operative recruits Cage for an unusual mission. Taking on the role of a lifetime, he soon finds himself channeling his most iconic and beloved characters to save himself and his loved ones. The film was written by Tom Gormican and Kevin Etten.

Of course Cage is playing a fictional version of his eccentric self and looks like he’s having fun doing so. Check out below for the full trailer and leave us comments on your favorite Nicolas Cage movies: