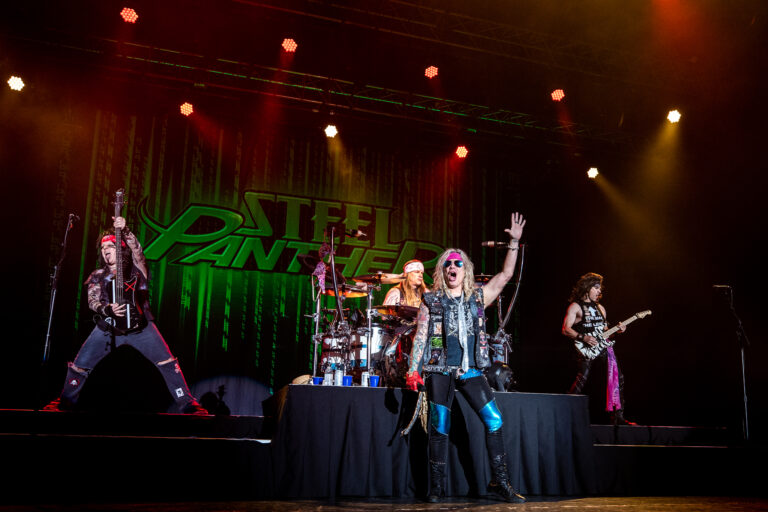 Heavy metal show-stoppers Steel Panther wrapped up their spring tour last night at Hard Rock Hotel & Casino in Atlantic City. The band shredded through a headlining set in the Sound Waves venue. The show was packed with all their monster riffs, ridiculous antics, and one big surprise for the capacity crowd.

Without an opening act, Steel Panther sauntered onto the stage and tore into their hit anthem “Eyes of the Panther.” They blew through a hit-filled set that included “Asian Hooker,” “Party Like Tomorrow Is the End of the World,” “17 Girls in a Row,” “Community Property,” and more.

Midway through the set, Steel Panther surprised the crowd with a very special guest. King’s X drummer Jerry Gaskill joined the band on stage. With Gaskill behind the kit, they ripped through a cover of Van Halen’s version of “You Really Got Me.”

Steel Panther closed things out with their hit track “Death To All But Metal.”

They returned to the stage for a single encore of the riffy “Gloryhole.”

Going to see Steel Panther live isn’t just a show, it’s a spectacle. It’s a rock concert, a stand-up act, and a broadway musical all rolled up into one. Rock music doesn’t always have to be so serious. Things like Taylor Hawkins’ recent untimely passing remind us that we need some comic relief now and then. Thank God we have Steel Panther for that.

Next up for Steel Panther is a performance at Welcome to Rockville in Daytona, FL alongside KISS, Korn, Guns N’ Roses, Nine Inch Nails, and many more.