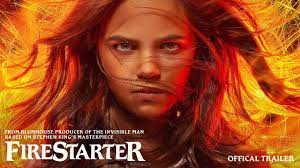 The latest remake of a classic Stephen King story is hitting theaters and Peacock this week. Firestarter which is based on the novel of the same name, revolves around a couple desperately try to hide their daughter, Charlie, from a shadowy federal agency that wants to harness her unprecedented gift for turning fire into a weapon of mass destruction.

Charlie’s father taught her how to defuse her power, but as Charlie turns 11, the fire becomes harder and harder to control. When a mysterious operative finally finds the family, he tries to seize Charlie once and for all — but she has other plans.

The film stars Ryan Kiera Armstrong as Charlie and Zac Efron as Andy Mcgee, and Kurtwood Smith as Dr. Joeseph Wanless. The film was directed by Keith Thomas. If you’re a fan of Stephen King then be sure to check it out.

The post The Latest Stephen King Remake ‘Firestarter’ Hits Theaters And Peacock This Week appeared first on Age of The Nerd.