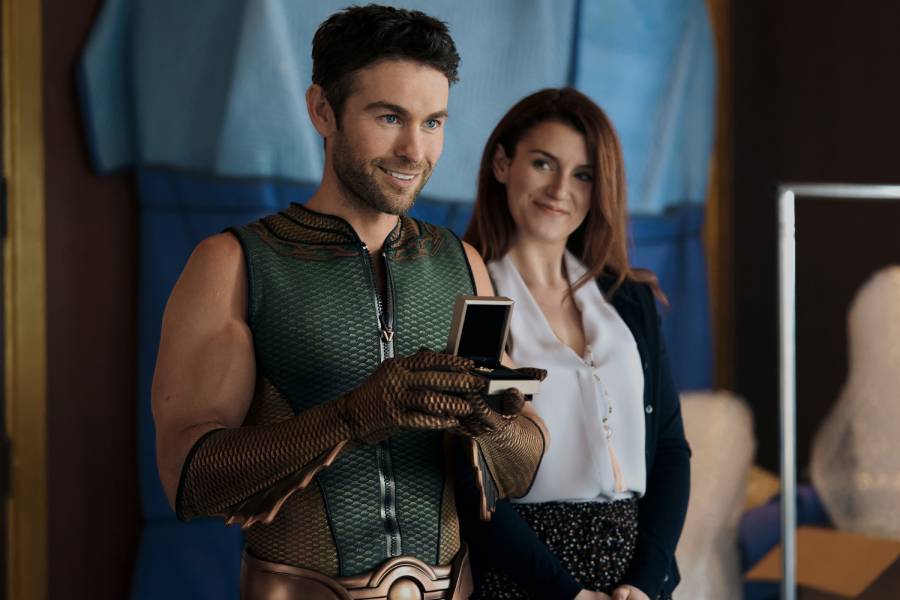 The Boys are back and bloodier than ever as we continue to dive into season three of the Prime Video series. It is hard to believe that there are only a mere three episodes left to go and one of them just happens to be the hyped “Herogasm” episode. We didn’t think they could (or rather would) pull this one off, but all we can say is just wait and see!

We recently had a chance to catch up with The Boys cast members Chace Crawford who plays The Deep and season two newcomer Claudia Doumit who plays congresswoman Victoria Neuman, who we have now learned is the infamous Head Popper. They speak to us about exploring their roles in season three, uncomfortable moments and more!

We asked Doumit what it was like to have the opportunity to further explore the character of Victoria, as throughout season three we learn a bit of her backstory and of course the weight of carrying around such a large secret in regards to her abilities. Doumit says with a laugh,

Well, her personal life is pretty dysfunctional! But seriously, as an actor it is always such a gift when you get to find out more about your character with their past, their personal life because it just enriches what ever you have to play with and it just gives you so much more. I was actually just endlessly excited about diving into Neuman’s personal life and how that whole world operates this season.

Unquestioningly, The Deep is one of the funniest characters in The Seven, and certainly brings a level of, let’s just say uncomfortable comic relief to the series as a whole. It seems that after breaking away from his cult involvement, he is now even more spineless, like his fishy friends, will we ever see him stand up to Homelander? Crawford reveals,

Thank you! (laughs) That is an interesting question! Homelander is an interesting one and I think that given the greenlight for season four we may see just how far he is really willing to go! I always think it would be interesting to come to that moment where there is a utter breakdown or a snap and as an actor I think that would be really fun to see where we go from there. The problem with Homelander is he’s just too all powerful! He can kill you in a second and he’s obviously totally deranged so, we’ll see…I don’t know! He’s definitely operating on his backfoot in season three where he’s just happy to be back and doesn’t want to make any missteps so he wants to maintain the status quo with Homie, you know! It’s his best friend obviously (laughs).

Things have been a bit of a rollercoaster ride for The Deep over the last two seasons, so when speaking about what he was most looking forward to for his character in season three, Crawford tells us,

Without giving any spoilers away, I really look forward to being back on set playing The Deep and interacting with Homelander and the rest of The Seven in the tower. The interactions in the hallway in A-Train are great as well! He is feeling himself now and he has that fake confidence back and that is really fun to play. There are also some fun moments and interactions with my wife Cassandra and how it played out when he gets assigned to a new job in season three which I think is hilarious. Also, his memoir is coming out, so that will be quite funny as well.

Some of our favorite moments of the new season are with The Deep and things we just can’t unsee, so we were curious to know how difficult it is for Crawford to not break character while filming. He reveals,

That’s a great question! Very hard actually! Honestly, there’s so many times and one of my goals funny enough is to get Antony [Starr] to break (laughs). The first scene back was in episode one and without giving too much away we run into each other in the hallway and behind-the-scenes of this thing and I got him to crack by talking about a ghostwriter writing my book and I said ‘I didn’t write it…I can’t even read!’ which was some impromptu sh*t and he was trying so hard not to laugh, but I got him and we all broke. When it gets going it’s a lot of fun all the time.

Season 3 of The Boys is currently streaming on Prime Video.

The post Interview: Chace Crawford And Claudia Doumit Talk The Boys Season Three! appeared first on Age of The Nerd.