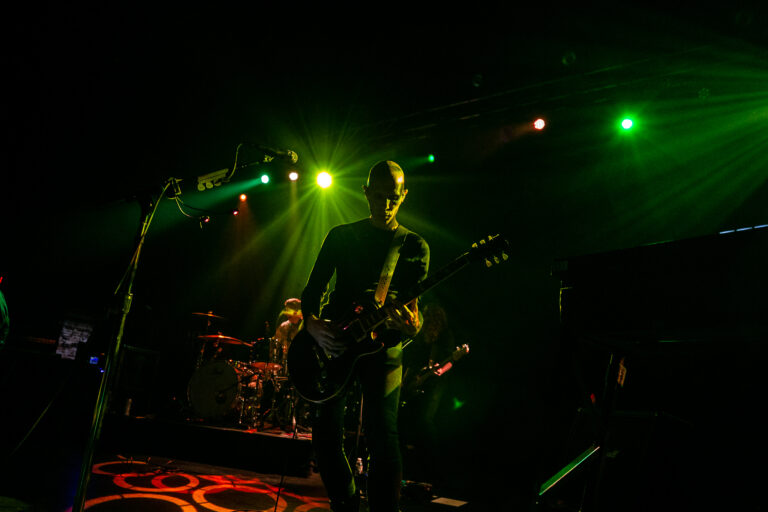 Review and live photos from The TLA in Philadelphia

Last night in Philadelphia, Billy Howerdel brought his first-ever solo outing to the the Theatre of the Living Arts. The famed guitarist and songwriter of A Perfect Circle and ASHES diVIDE is out on the road supporting his debut solo album What Normal Was [Alchemy Recordings/Rise Records/BMG]. He treated fans to a moody set of his solo songs, and threw in a special surprise from his back catalog as well.

VOWWS served as special guests for the show. Their brooding brand of electro-goth rock got a great reaction from the crowd. The upstart duo has previously toured with Deftones, and they were a perfect fit to warm up The TLA for Howerdel. The group will follow Billy for the rest of the run, so fans should plan to show up early.

He strolled onto the stage unassumingly and started things off with “Beautiful Mistake.” His songs are haunting and even ominous at times, but Billy is anything but. After the second track “The Same Again” garnered a huge roar from the crowd, Howerdel simply leaned into the mic and said – “thank you.” He was very humble for a platinum-selling guitarist of an arena-sized rock band.

And speaking of A Perfect Circle, Howerdel could have easily beefed up the set by slipping in a few tracks from his main band – but he didn’t use that as a crutch. He relied on his new solo material, which gives him more than a leg to stand on. He did, however, treat fans to one nugget from his arsenal – ASHES diVIDE’s “Forever Can Be.”

He wrapped things up with “Stars.”

The neighboring New Jersey native proved that his creativity doesn’t end with A Perfect Circle. His new songs have weight to them, and translate well live. Fans of Howerdel’s previous ventures would be wise to catch him in a solo setting.

Howerdel’s solo trek continues through the end of the month, wrapping up on July 24 at the Ventura Music Hall in Ventura, CA. He will be making stops in Baltimore, Charlotte, New Orleans, Dallas, and more. Tickets and VIP Packages are on sale now HERE.

New Jersey-born and Los Angeles-based vocalist, multi-instrumentalist, producer, and composer Billy Howerdel has quietly asserted himself as an alternative music auteur whose knack for massive hooks belies a keen emotional understanding and sonic acuity. Devoting his life to music after witnessing Pink Floyd live, he acted as something of a behind-the-scenes journeyman, working as an in-demand touring and studio tech for the likes of David Bowie, Guns N’ Roses, and Nine Inch Nails. Striking up a friendship with Maynard James Keenan when Tool opened for Fishbone (for whom Billy served as a tech), he occupied a room in a North Hollywood cottage with Maynard.

Billy founded A Perfect Circle with Maynard in 1999. The group’s seminal full-length debut, Mer de Noms, went platinum and made history as the “highest Billboard Top 200 bow for a rock band’s debut.” They followed it with the platinum Thirteenth Step [2003] and gold Emotive [2004]. The group made their return with 2018’s Eat The Elephant, marking their fourth consecutive Top 5 debut on the Top 200.

In between, Billy’s music has also appeared in video games and on the big screen. During 2008, he made his first solo statement under the moniker ASHES diVIDE with Keep Telling Myself It’s Alright. In the next decade, the album quietly pervaded as a cult favorite with millions of streams. Now, Howerdel has arrived with his first proper full-length solo outing What Normal Was.