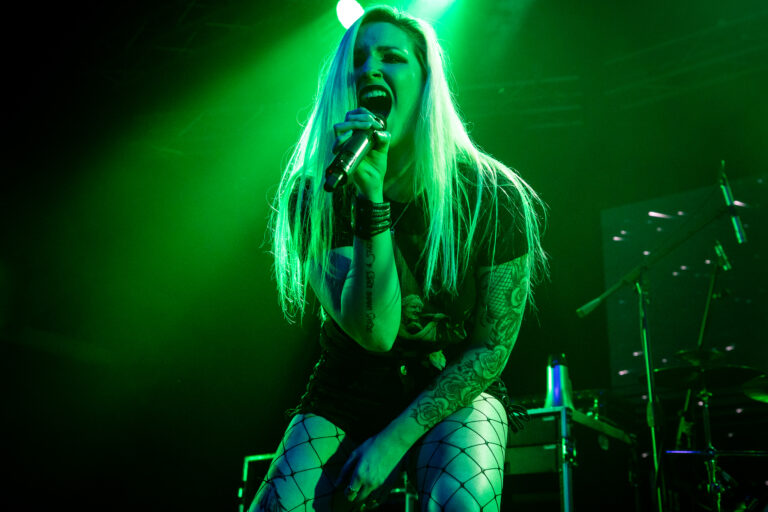 Eternal Frequency have released an emotional new song “Breathe In, Breathe Out.” The music video features fan-submitted footage edited together to create a raw and powerful experience. Stream the official clip now below.

The track was produced by Carson Slovak and Grant McFarland of Atrium Audio, LLC.

Speaking about the song, lead vocalist Emelle Elizabeth said, “‘Breathe In, Breathe Out’ was written and recorded at the height of the COVID-19 pandemic when all of us in Eternal Frequency were feeling incredibly out of place due to not being able to be on stage and feeling the aftermath of the ‘what ifs’ going on in the world. The song is super meaningful to me especially because I also wrote it during a time when I had just lost my mother tragically and it’s a feeling I still haven’t been able to fully process. It focuses on the trials and tribulations of anxiety and depression. The track is an anthem for anyone who is close to the edge, but needs a little faith to take a step back and realize that they’re not alone in your struggles and you’ll always have someone looking out for you. Sometimes you just need to hear that everything will be okay. We hope this song can provide some sort of comfort to those who need it most. We are here for you.

Depression and anxiety are very real issues. All of us are battling them to some extent every single day of our lives. Throughout the pandemic, many of us had to face it all head on. Some of us became stronger and were able to rise up from the rubble, but some were unfortunately not so lucky and became a victim of the challenging times. We wrote this song as an anthem of hope to bring peace and escapism to those who needed it most while also dedicating it to those who lost their battle. We hope this song can bring some sort of comfort and to help you realize that you’re never alone. No matter how close you are to the edge, there is always time to turn around. Whatever you are going through – find strength in believing in yourself.”

Eternal Frequency are having a breakout year in 2022. Their previous single “A.I.” has amassed over 265,000 views on YouTube. In September, Eternal Frequency will perform at Rocklahoma over Labor Day Weekend in Pryor, OK alongside Korn, Shinedown, Five Finger Death Punch, and more.

“Instead of looking back at the trials and tribulations that occurred this past year, let’s all look ahead and focus on the advancements and accomplishments to come,” the band said on social media back in January. “New Year means New Beginnings. We are armed and ready to fire.”

Last March, Eternal Frequency released a new original single “What Are We Waiting For?” In August, the unleashed their acclaimed cover of Nine Inch Nails’ seminal hit “Head Like a Hole.” The track was produced by Atrium Audio. The music video was directed by SquareUp Studios and edited by C.ENT Productions.

It was not the band’s first crack at covering an iconic song. They previously covered Queen’s “The Show Must Go On.” All proceeds from the track went to help support the NIVA (National Independent Venue Association) during the COVID-19 pandemic.

Eternal Frequency is a five-piece hard rock outfit from Pennsylvania. Fronted by vocalist and songwriter Emelle Elizabeth, Eternal Frequency are following in the footsteps of acts like Evanescence, Halestorm, Spiritbox, and others. The band’s lineup is rounded out by guitarist Justin Walters, guitarist A.J. Lopez, bassist Tyler Travis, and drummer Dane Lowell.

If you or someone you know needs help, please dial #988 or visit https://988lifeline.org/ – you are not in this alone.