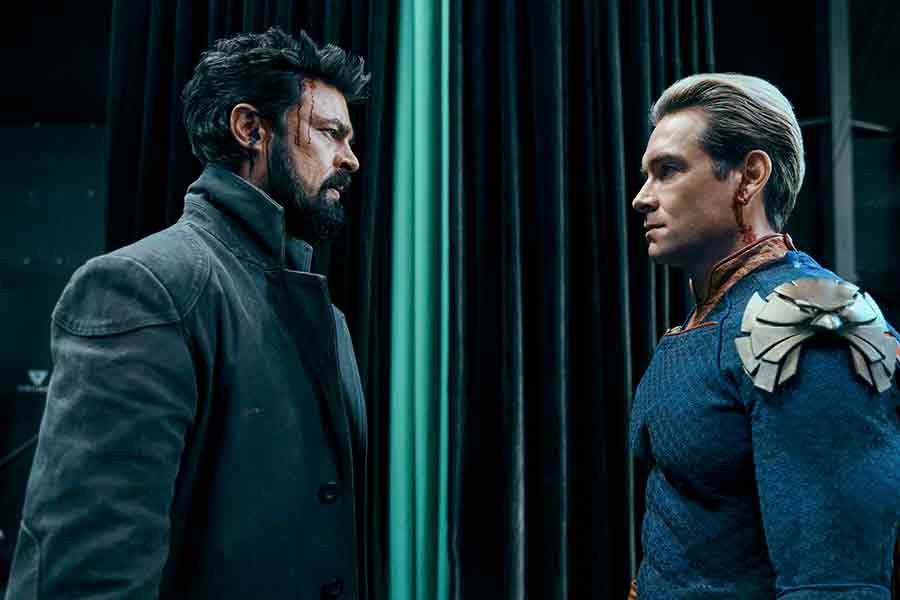 The Boys is quickly climbing the Amazon prime Video charts, the dark comedy based on the comic series of the same name by Garth Ennis and Darick Robertson. The series was adapted for TV and premiered on Prime Video on July 27th, 2019, quickly setting itself aside from preconceived notions about superhero shows.

Now in its third season, the stakes are higher than ever. Both the boys and the seven are dealing with the fallout from Stormfront who was the main villain of season 2 and the loss of a major loved one for one of the series’s most recognizable faces; Billy Butcher (Karl Urban).

While season three deals with similar threats of the last two seasons, the main of course being the unhinged ultra-powerful Homelander (Anthony Starr), what differentiates season three from its predecessors is the amount of thorough and compelling character arcs that were accomplished just throughout 8 episodes.

As mentioned, Butcher and Homelander are definitely the centers, both being the respective leaders of their groups. Their animosity towards each other only grows and is strengthened by the addition of Temp V into the plot. An experimental drug from Vought that gives someone superpowers for 24 hours.

Butcher is the first to take the drug, with Hughie (Jack Quaid) not far behind as he’s still stumbling over his own insecurities of being too weak to not only be on his team of supe fighters but also to be dating Annie (Erin Moriarty) because of her powers.

Speaking of Starlight herself, Erin Moriarty delivers an astounding performance this season reminiscent of her past performances but with the combined growth of her character that’s been building since season one. The ending scene of episode six is driven by her composed emotion and unflinching stature. Don’t let the episode title fool you, episode six is probably the best episode of the season.

In addition to our pre-established character arcs, we also are introduced to Soldier Boy, played by Supernatural’s Jensen Ackles. A typical “man’s man,” Soldier Boy is about as devoid of emotion and obsessed with violence as any of the other supes, but with a heaping dose of unacknowledged PTSD after being tortured in Russia for forty years.

This season handles mental health in numerous episodes from addressing the origins and effects of MM’s (Laz Alonso) OCD, to Soldier Boy’s denial and poor handling of his PTSD, to Butcher revisiting a haunting memory where we finally get to experience the abuse he and his younger brother faced at the hands of their father.

This episode features a content warning at the beginning, which is shocking, especially for The Boys, known for its gratuitous violence and sexual content. Nonetheless, the creators carefully considered the implications of the content they were delivering to audiences. Creator Eric Kripke mentioned in several interviews that though many heroes die in the finale, he wanted to avoid certain problematic tropes that other media have upheld. A commendable action and shows that even the most raunchy, gritty material can showcase diligence and thoughtfulness.

Even though many arcs were explored and culminated in epic moments for several characters, by the end of the season, viewers are left right back where they started, with Homelander still being a threat and spreading his influence to his son Ryan (Cameron Crovetti). The boys have also not resolved intensifying issues with congresswoman Victoria Neuman (Claudia Doumit), who was a part of a major reveal at the end of the second season.

Season 4 will certainly bring a lot more trouble for The Boys – Hughie, Butcher, MM, Frenchie (Tomer Capone), Kimiko (Karen Fukuhara), and now Starlight, who has become an honorary member of the team. Season 3 is The Boys most successful season yet, seeing a 234% rise in watch time since season one and a 17% increase in viewership from season 2.

The Boys also received 6 Emmy nominations, including outstanding writing for a drama series, outstanding visual special effects, and outstanding drama series. It’s up against other streaming successes like Stranger Things, Succession, Euphoria, and Ozark, so hopefully, that viewership will help boost the show’s reputation in the eyes of the Television Academy.

The post The Boys Proves a Superhero Show is Not Above Handling Series Issues and Delivering Stunning Performances appeared first on Pop Culture Press, part of the Pop Culture Madness Network.