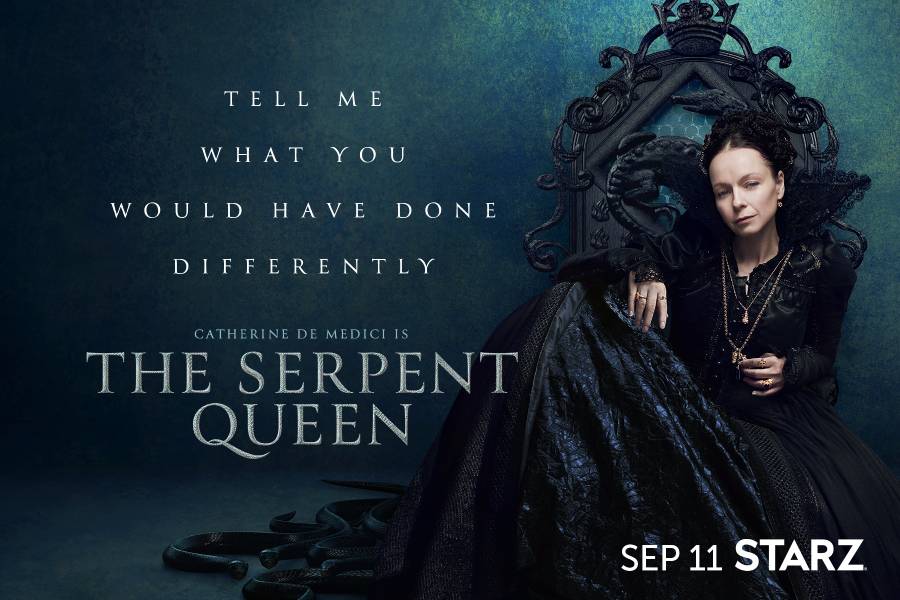 A historical drama with an edge, “The Serpent Queen” puts a contemporary spin on conventional storytelling to tell the tale of Catherine de Medici’s (Morton) rise to power. In the series premiere, “Medici Bitch,” Catherine’s tale unfolds through flashbacks as she defends her actions and imparts the lessons she’s learned to her new servant confident, Rahima (Sennia Nanua, The Girl with All the Gifts, Frankie). At 14, the young, orphaned Catherine (Liv Hill, “Three Girls,” Jellyfish) marries into the 16th-century French court. Despite her commoner status, her uncle Pope Clement (Charles Dance, “Game of Thrones,” “The Crown”), has negotiated a large dowry and a geopolitical alliance in return for the union, and with it comes the expectation of many heirs. However, on her wedding night, Catherine learns that her new husband is in love with Diane de Poitiers (Ludivine Sagnier, “Lupin,” “The Young Pope”), a beautiful lady-in-waiting twice his age.

With her future suddenly uncertain and with little hope of conceiving, Catherine must quickly learn who she can trust – both within her personal entourage of courtiers and the members of the royal court – while outmaneuvering anyone who underestimates her determination to survive at any cost.

“The Serpent Queen” is based on the book Catherine de Medici: Renaissance Queen of France by Leonie Frieda and is from writer and executive producer Justin Haythe (Revolutionary Road, Red Sparrow, The Lone Ranger). Stacie Passon (“Transparent,” “Dickinson,” “Billions”) directs multiple episodes, including the premiere episode and serves as executive producer. The series is executive produced by Francis Lawrence (The Hunger Games: Catching Fire, The Hunger Games: Mockingjay, The Hunger Games: Mockingjay Part 2) and Erwin Stoff (The Matrix, 13 Hours, Edge of Tomorrow). The eight-episode series is produced for STARZ by Lionsgate Television and 3 Arts Entertainment.