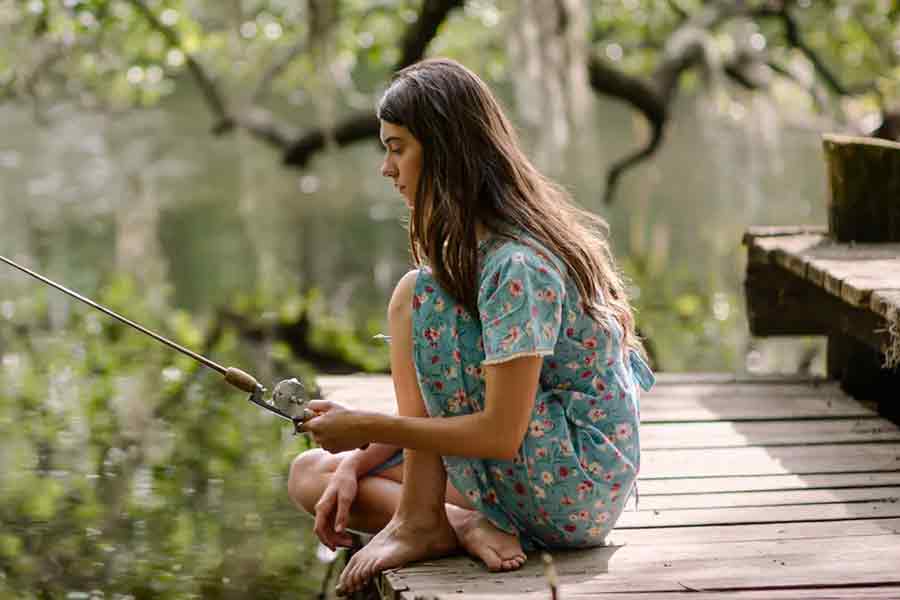 Where The Crawdads Sing

Beneath the surface is the story of a young woman who uses nature as her guide in the face of numerous tragedies that unfairly befall her.  The film, based on the novel of the same name by controversial author Delia Owens introduces us to Kya Clark (Daisy-Edgar Jones) a young girl who is abandoned by her family and must rely on her resources and the few who show her kindness to survive.

As she grows, Kya experiences more love and loss than any of us could imagine. Her encounters eventually transcend into an accusal of murder, bringing her into the limelight of the close-knit southern town that isolated her for so long.

The film echoes Nicolas Sparks’s novels and some lines of dialogue are so forced and cringe worthy that you feel less like you’re in a theater and more like you’re in your living room watching the Hallmark channel.  Everything from the setting to the romance to the atmosphere serves as perfect ingredients for a chick flick and critics seem to be forgetting that that’s exactly what this film is.

Since the dawn of rom coms in the 80s, male film critics have been labeling films equated with these elements as boring, contrived, “women’s films” that should only be viewed as a guilty pleasure.

However, this unfair and sexist labeling forgets that chick flicks can propose resonating themes and lessons despite their ultimate feminine appeal.  2001’s Legally Blonde starring Reese Witherspoon who produced Where The Crawdads Sing is revered as one of the best chick flicks of all time to the point where some would even deny that it fits into that category.  Nevertheless, a quick google search will reveal Legally Blonde as a certified chick flick classic and though Where The Crawdads Sing is far from a classic, it isn’t afraid to indulge in its genre tropes and is unapologetic about the story it’s trying to tell.

The stereotypical feminine romance plot is melded with a more sinister tone as the murder trial progresses; the film’s attempt to be taken somewhat seriously since it knows the husbands sitting with their wives will roll their eyes every time a gripping courtroom drama isn’t on the screen. The balancing of genres simultaneously harms the film due to choppy editing, a nonlinear structure that gets lost in a tangle of narratives, and disproportionate flashbacks that bleed into each other.

However, the utilization of crime drama, romance, and survival story help the film illustrate its message of the power of nature and allows audiences to dive deeper into Kya’s motivations.

Kya is wondrously played by Daisy-Edgar Jones whose raw emotion and shy exterior marries the tropes of the “Mary Sue”(a woman who can overcome any challenge presented to her) and the “Special Girl” (a woman who is ordinary but is fetishized by the men around her for being “different” which makes her all the more attractive).

Some critics have even described Kya as the “manic pixie marsh girl”. A clever conglomeration of Kya’s cruel nickname in the movie and the manic pixie dream girl trope. Besides her beautiful home in the marsh, Kya is far from as ethereal as the typical manic pixie dream girl should be but instead is a broken down soul inflicted with betrayal, abuse, and as mentioned, abandonment.

Some criticize the film for not painting Kya as resourceful as she’s described, who in her young years relies on a neighboring shop owned by a black couple who show her kindness in the face of her father finally leaving her.  The couple, played by Michael Hyatt and Sterling Macer Jr., are cast to the side, fulfilling the typical roles that black characters play in southern films that aren’t about slavery. Helpful, insightful, and ultimately embedded in the narrative to aid in the white protagonist’s journey.

The film is not without its flaws, especially since it’s forever associated with Delia Owens, who is still wanted for questioning regarding the murder of a poacher in Zambia. Many viewers have compared Crawdads’s narrative to that of the author, which is disturbing, to say the least.

Once again, the ability to separate art from artist must occur in order for audiences to enjoy this film and most films these days as cancel culture looms as a vulture over those in Hollywood, waiting for the next figure to misstep and be blasted in the media for any perceived wrongdoing.

However you feel about Delia Owens, her involvement in the film is limited as her name is listed only in the credits as the source material’s author.  Aside from the cheesy romantic elements and mostly boring cinematography, Where The Crawdads Sing leads to a shocking twist ending that will leave audience members audibly gasping-if they aren’t familiar with the novel. A twist that makes renowned horror movies look dull by comparison proves that you can’t please everyone, even with masterful storytelling.

Critics have sullied the ending by again comparing it to the real-life details of the author’s encounter in Zambia, even though the fictional events and actual events could not be more disparate.  Others have said the ending is not justified and that violence should not warrant any sympathy, despite the fact that the receiver of the morbid fate inflicted far more damaging violence upon his victim.

Judge it however you like, Crawdads is a typical, saturated southern tale dealing with themes that have been dealt with before and in much more satisfying ways. But the backlash it’s facing just proves once again that the media will go to any length to patronize and problematize films that are particularly crafted for women’s enjoyment.  Not fitting the male gaze, rough around the-edges formula Hollywood has upheld for years will never be fully accepted by the film community until they are able to let go of their preconceptions and realize that this film isn’t for you, so maybe your opinion doesn’t matter all that much.

Putting it simply, most men will find this movie boring and confusing. Women will find it sexy and liberating, the landscape aesthetic and the end-credits song Carolina by Taylor Swift haunting and mesmerizing.

Olivia Newman (First Match) directed the film along with the adapted screenplay written by Lucy Alibar (Beasts of the Southern Wild).

Ladies, do yourself a favor and see this with your girlfriends. Tell your husband you’ll meet him after Top Gun: Maverick is over.

The post Where The Crawdads Sing is a Film for Women- and Critics are Forgetting That appeared first on Pop Culture Press, part of the Pop Culture Madness Network.