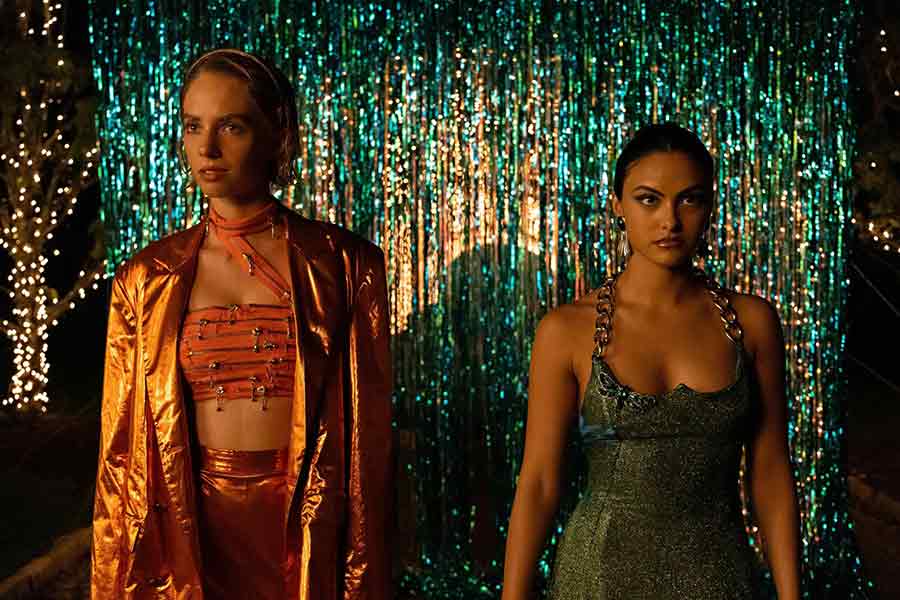 The latest teen dark comedy to hit Netflix Do Revenge is a sunny, pastled conglomerate of cringeworthy writing, cliched tropes, and a rushed, contrived ending-that doesn’t mean it’s any less fun to watch. Combining the gen-z icon forces of Camila Mendes (Riverdale) and Maya Hawke (Stranger Things) along with a killer twist, manages to salvage this movie from not completely plunging into the status of other embarrassingly written Netflix films. The film pays homage to several teen classics from Mean Girls to Jawbreaker and even features 90s teen queen Sarah Michelle Gellar. Aside from these quintessential references and elements, it’s difficult to pinpoint what exactly Do Revenge has to say about revenge, friendship, and performativity due to its insanely loose-strung ending.

The story follows Drea (Mendes) a 17-year-old girl (of course played by an almost 30-year-old actress) who’s enrolled at the prestigious Rose Hill Academy, on a path to success that she’s carefully coordinated and curated to her desires. Despite coming from a working class background, our protagonist’s cunning ability to manipulate situations around her cements her into the typical hot, popular girl archetype albeit with a few adjustments. Her life is forever changed when a nude video of her is leaked throughout the school by her boyfriend Max (Euphoria’s Austin Abrahms) who claims it was a misunderstanding involving his account getting hacked. Because of Max’s untouchable status, and because Drea punches him in the face, Drea is left friendless and resorts to seeking the help of Eleanor(Hawke) who a girl also wronged at Summer camp.

The girls hatch a plan to “do each other’s revenge”, meaning one makeover montage later and Eleanor is ready to infiltrate Drea’s former clique while Drea’s required to do community service at the same farm Eleanor’s ex camp crush works at. The movie progresses as any teen movie does and features a surprisingly hilarious drug montage, a formulaic feeling heart to heart from our two main characters, and the eventual climatic fight between our two heroines when Eleanor gets a little too comfy being the new queen bee. This leads Drea to dig into Eleanor’s past to uncover the true nature of her sudden vengeful confidant. As Drea states at the beginning of the film when referring to Max, “narcissists are too busy focusing on themselves to realize they’re getting played”, and that’s exactly what undoes our fallen socialite as she discovers she was the girl who made up a nasty, leaning on homophobic rumor about Eleanor and that this whole time she has been gunning for Drea as well.

It’s at this point that Eleanor dives into true “Glennergy”, yes a real term the movie uses to describe when one possess the energy of Glenn Close’s character in Fatal Attraction, as she goes from 0 to 100 in the blink of an eye. Once Drea sees her true intentions, Eleanor blackmails her using her hard-working mother as collateral to force Drea into attending an exclusive Ivy-League party with all her old friends. When Drea leaves trying to process being double-crossed Eleanor then hits her with her car to enact her plan of re-assimilating Drea into her old friend group. This is where the film starts veering off the deep end. Though the twist is shocking and introduces new stakes into the story it doesn’t come without a set of questions. What if Drea remembered she started the rumor down the road? How was Eleanor going to convince Drea to go to that party after Drea didn’t receive an Ivy acceptance letter? Did revenge so blind Eleanor that she actually allowed for her first crush to be expelled only so she could get closer to taking out the girl who kept her from entering a relationship with her in the first place?

Not to mention, that by the end at the aforementioned party Drea resorts to publicly bullying Eleanor in front of their enclosed circle of fake friends and then confronts her outside, wanting to bury the hatchet and end their cycle of revenge. Max suddenly emerges and admits that he leaked the video as his own revenge on Drea for just being her selfish, methodical self and threatens to expose the girls. But picking up a few skills from her “revenge mommy”-the amount of vomit-inducing terms in this movie are insurmountable. Eleonor secretly records Max’s confessions and projects it at the party for all to see, taking down the sleazy, fake feminist that started it all. The film ends with Drea and Eleanor repairing their friendship because they “get each other”-I suppose that this movie’s message is true connectivity and friendship outweighs someone’s literal attempts to demolish you and your family. Many are calling this film a light-hearted teen comedy with two of TVs most prevalent actors tearing up the screen with their unabashed presence. However, the film’s themes and keeping the two girls together completely ignores or at least gloss over a large majority of character growth especially on Drea’s side.

Drea is painted as our main protagonist out of her and Eleanor and while I relate to her and her unrelenting anger, I can’t sympathize with her. She only apologizes for her cruelty towards Eleanor at the very last minute and her words don’t feel genuine just because of how many social betrayals she’s inflicted on people for her own selfish gain. At the beginning of the film she publicly humiliates a girl just because of a small rumor she made up about her. Just about 20 minutes later she frames a girl for cocaine use who spread her leaked video around. Though Max’s action cannot be justified and it’s shameful that we never see him hauled off to jail for child pornography, I would contest that Eleanor’s initial plan of making Drea lose all her friends is in a way warranted due to not just Drea’s afflictions upon Eleanor but multiple characters in the story.

Flawed protagonists are intriguing ones, but when their redemption is so carelessly shoe-horned into the last 30 minutes of the film especially after an entire escapade demonstrating all of their glaring discrepancies, it’s hard for audiences to level their feeling towards the character. One of Drea’s sources for such intense anger is the fact that she feels betrayed by the disclusion of her performative friends who claim to fall into the woke, compassionate, progressive teen category but only care about status. But this is exactly what Drea is to! Her performativity is even more relevant simply because of the homophobic statements she made about Eleanor. Though they were children when the rumor was spread, the film fails to have Drea realize exactly how hurtful the implications of her words were. Simply put, both of our protagonists are glamorous, iconic, ideal girl bosses but not without their raging display of flaws that may leave the viewer, confused, disorientated, and ultimately coming out with a less than stellar experience.

Even after all of these factors, Do Revenge is still a wild good time with a kick-ass, mostly female soundtrack featuring Olivia Rodrigo, Billie Eilish, and Chloe Moriando just to name a few. Despite its flaws, Do Revenge certainly stands out even if its highs outweigh its lows.