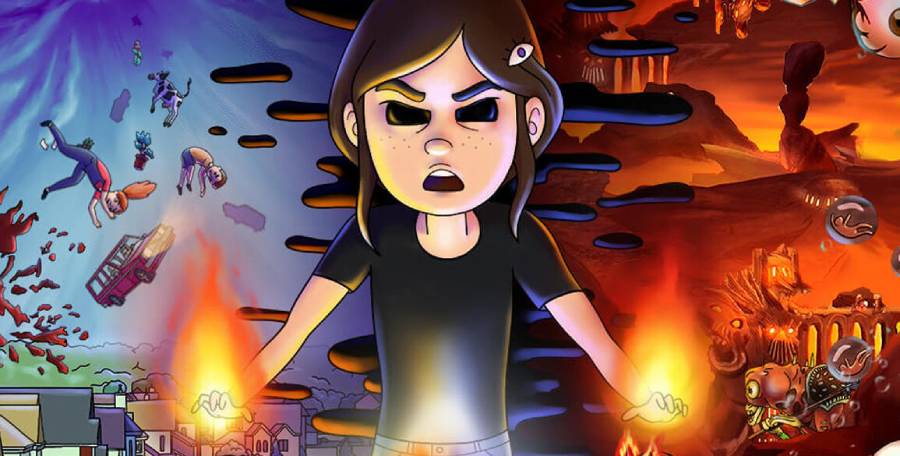 After viewing the premiere episode and catching up with the cast and crew of FXX’s “Little Demon” during their panel at San Diego Comic Con we felt the series was both entertaining and smartly written. The animated series focuses on what happens with Satan’s daughter, Chrissy, voiced by Lucy DeVito, who happens to be the antichrist hits puberty. Her mom Laura, voiced by Aubrey Plaza, desires for her daughter to have an everyday normal living in Delaware, but her father Satan, voiced by Danny DeVito has other plans for her soul.

The show made it’s official premiere on FXX, as well as,  on Hulu, back on August 25th and continues to churn out solid ratings week after week. Despite the praise from fans and critics, certain Christian groups are taking issue with the series angered that a Disney-owned animated series would explore a demonic topic.  During their SDCC appearance actress Aubrey Plaza commented that they were “enjoying normalizing paganism” while working on the series.

Many Christian parents have taken to Tik Tok and other social media platforms to voice their opinions about the series claiming it is frustrating as a parent to have to vet all of the shows their children watch and saying that somehow Disney has “crossed a line”.  We have chime and ask whether or not these outraged parents somehow missed the TV-MA rating that “Little Demon” received. That right there lets you know that this series is made for “mature audiences” and not at all made for children. This is just plain common sense! It is an adult animated series which we must point out that we are seeing more and more of these days with shows like “Rick and Morty”, “Bob’s Burgers”, “Archer” and more!

We find “Little Demon” to be incredibly entertaining and absolutely hilarious and find ourselves wishing that people would not take these things so seriously all the time. The voice acting is stellar, as in addition to the talents of the DeVito’s and Plaza, they also have Arnold Schwarzenegger, Mel Brooks, Will Jackson Harper, Pamela Adlon, Rhea Perlman, Shangela, Patrick Wilson, Dave Bautista, June Diane Raphael, Toks Olagundoye, Lamorne Morris, and Sam Richardson lending their voice talents to the series as well.

Not to mention “Little Demon” is another series that focuses on strong female empowerment, as Danny DeVito joked during the panel, “I think you’re gonna find that in the show Satan is really a good guy. The guy was deprived of his spawn— who is a girl— but of course, I thought it was gonna be a boy. But the future is female.” And he couldn’t be any more correct and we hope this hilarious animated series gets even more time to shine!

From creators Darcy Fowler, Seth Kirschner, and Kieran Valla, “Little Demon” airs every Thursday on FXX and is available for streaming on Hulu.