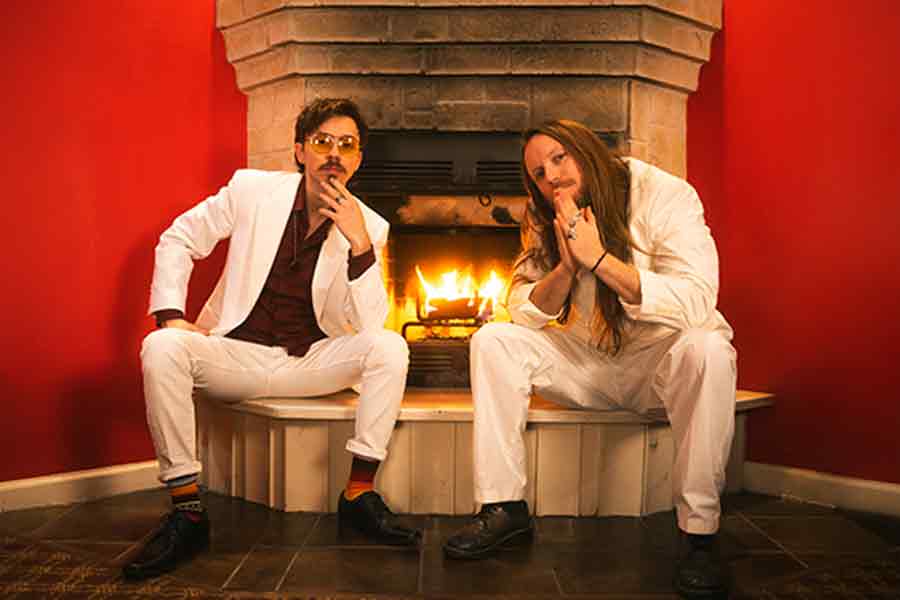 Aside from the familiarity and inundation of pop and rap songs, there’s Human Zoo founded by Joey Papa and Spentzer Daniel, expanding the boundaries of music and playing with intricate and unique beats, sounds, and lyrics. Their first music video “Serial Killer” fittingly released 2 days before Halloween 2021 was screened at the 2022 Cranford Film Festival winning an audience favorite award. The video matches the song’s lyrical artistry and groovy vibes contained in the Bee Gees like vocals, and bouncy chord progressions. The band’s second released track “Wealth and Hellness”, a clever play on words, features singer-songwriter Will Wood as the two dive into Latin American instrumental influences, notes of jazz, and vocals that dance throughout the track. Never really staying in one place, in their songs and genres alike, Human Zoo is committed to discovering and playing with new elements of music and capturing a sound that truly is in a league of its own. Now about to release their debut album, the band is heading to the colorful town of Asbury Park to grace the stage of esteemed venue The House of Independents with their full scale weirdness. Oh yeah, and the show is hosted by Satan.

Q. As a Cranford local band, explain how your origins and your community plays a role in your music and your influences?

Joey: I’m more of the Cranford native than Spence.

Spence: Yeah, I’m from the woods.

Joey: (laughs) Yeah I’ve lived here for quite a long time. My family grew up here so there’s definitely a ton of roots there. Over the years we’ve connected with a few musicians here. Bobby Shock being one of them and Gary Guitar another great guitar player. We’ve bumped shoulders with a few people from here but we really came up through the MontClair scene and the meatlocker, stuff like that. I like [Cranford] a lot but there’s not a big art scene for younger upcoming artists. There’s music here and the Cranford movie theater is really cool but there’s really no venues or place for younger bands to play. Close by is the studio where we work and where we do a lot of our projects at Sonoma Beach Studio. The best part about Cranford has been its location. It’s very easy to get to, it’s right off the Parkway and there’s a nice downtown area with a lot of restaurants so whenever people come over and we have band practice there’s always a lot of food to eat.

Spence: We shot our music video over [in Cranford].

Joey: Oh yeah! It ended up being the backdrop to what I think is a wonderful music video that we won an award for. Cranford tends to be for some reason the backdrop for a lot of big feature films and TV shows.

Q. Your music incorporates a variety of sounds. What genre would you most closely equate your music to and what genres do you derive inspiration from?

Joey: There’s a lot. We recently got called “avant-pop” and I sort of like that. We hate to stick around in a genre. We love bands like Ween, Mr. Bungle, and Queens of the Stone Age. Those are all bands that love priding themselves in not sticking around in one place for too long.

Q. Your music video for “Serial Killer” won an audience favorite award at the 2022 Cranford Film Festival. What was your reaction?

Joey: We were comically cocky about it. We were like ‘we’re gonna win’(laughs). It sort of became a running joke. It’s great that we won. I’m just really glad people like it! It’s just nice when you put a lot of hard work and a ton of hours and money into something and people end up liking it!

Spence: Yeah we were in that parking garage till 3, 4 in the morning for multiple days.

Joey: Yeah one of the days we shot it was the hottest and muggiest day of the year. Everyone was miserable for about 4 hours. It’s just cool that it paid off.

Q. The Cranford Film Festival allowed for your music video to be on the big screen as well as connect you with other artists. Talk about your experience with the event.

Joey: Well we showed up in our white suits which was fun. Actually, the original plan was that we were going to bring our own red carpet and roll it out. It was going to be a whole spectacle. I think budgetary reasons didn’t allow for that(laughs). We wanted to film that actually and then edit something together for next year. It was interesting because I think we were the only band. There might have been one or two other music videos but we were the only band that was present. A learning experience was, back in the day they used to put the title and the artist of the song, we didn’t do that(laughs).

Spence: Yeah people didn’t even know it was a music video until it was like ¾ of the way through(laughs).

Joey: Everyone had nice titles that they made for their films and everything and we just forgot to do that I guess. I think because we were the only band there it was different, it was something fresh.

Spence: We had actually just got done scoring our friend’s film “All In”. That’s gonna be submitted to the Cranford Film Fest. It’s already in 10 festivals so far.

Joey: Our friend Sal who filmed “Serial Killer” just screened his film at the Cranford theater. We did the soundtrack for it which was very cool.

Q. You’re scheduled to play a show at The House of Independents in Asbury Park! Is this an area you’re familiar with?

Joey: Yeah actually I’m wearing a Mercury Brothers shirt right now. They’re an Asbury Park local band. We’ve bumped shoulders with a few acts from that way. We just did a collaboration with Patty C for our series Human Stu. It’s a series where we make a song in a day for someone.

Spence: We just saw Pollyanna down there for their album release.

Joey: That was what kind of sparked the idea for us to play at The House of Independents, we went there and saw [Pollyanna] and their album release show. We were like ‘wow, this is probably the venue to do it’. I think I’ve been there maybe once or twice. We’ve played The Saint before, maybe that’s the only time we’ve played in Asbury but I’ve been to Wonderbar, I’ve been to Saints, The Stone Pony, all of them. Actually the first concert that me and Spence went to see together was Primus at the Summer stage which was a great concert.

Q. What can fans expect from your upcoming show?

Joey: It’s hosted by Satan. We’re doing a merch giveaway so there’s gonna be some things you can do to achieve said merch. We plan to put on quite a spectacle. I think Satan hosting it will be quite fun.

Is Satan an artist?

Joey: I think we started this during covid. Spence started demo-ing things out at his house and he was sort of sending me tracks. At a certain point, it was ok for us to meet back up again and we got to work pretty early on the whole thing. The album kind of went through a few cycles. It was kind of completed last year but we didn’t have the right plan in place yet we still had to get some artwork together. We wanted to come up with how we were going to piece the whole thing out.

Spence: We had 7 songs for like 2 years and we were like alright albums coming out in a month lets add 3 more.

Joey: Yeah that’s basically what happened! There’s gonna be a crispy 10 tracks on the album. There were 7 until about a month ago. We very quickly got together and made the other 3 and I actually think they’re the 3 strongest songs on the record.

Spence: Yeah they are.

Joey: We do this series called Human Stu where somebody comes in and then for a 12 hour block we have to write, record, and mix an entire song. We’ve gotten very good at the fast and furious songwriting, mixing, and other stuff. We didn’t really second guess a lot and I think that helps the end result of a song. I think it was Mccartney or Lennon that used to say all the time that their best songs were when they started them they finished them. So I think if you can execute a thought as quickly as possible from start to finish you’re probably gonna come up with a better end result.

Q. What’s next for you? What do you hope to accomplish during the rest of 2022?

Joey: We have one more single coming out and then the record will drop. We’re doing a delayed release for digital but the record will be out this weekend at the show. Hopefully we’re just gonna play some more gigs and support the album. I think there’s a New York date in the works and maybe at the turn of the year we’ll start doing some more out of state things. But honestly I think a little break will be needed.

Spence: We also might start recording another album immediately.

Joey: (laughs) Yeah that also might happen. There might be a very slight rest, like a day, and then we’ll get back on it. Our dream by next year is to go to Rancho De La Luna. A lot of our favorite bands and musicians have recorded there and a friend of ours got to record there. He was telling us what a great experience it was, which was really great to hear because I’ve been dreaming about that my whole life. So we might do our next record out there, in the desert.