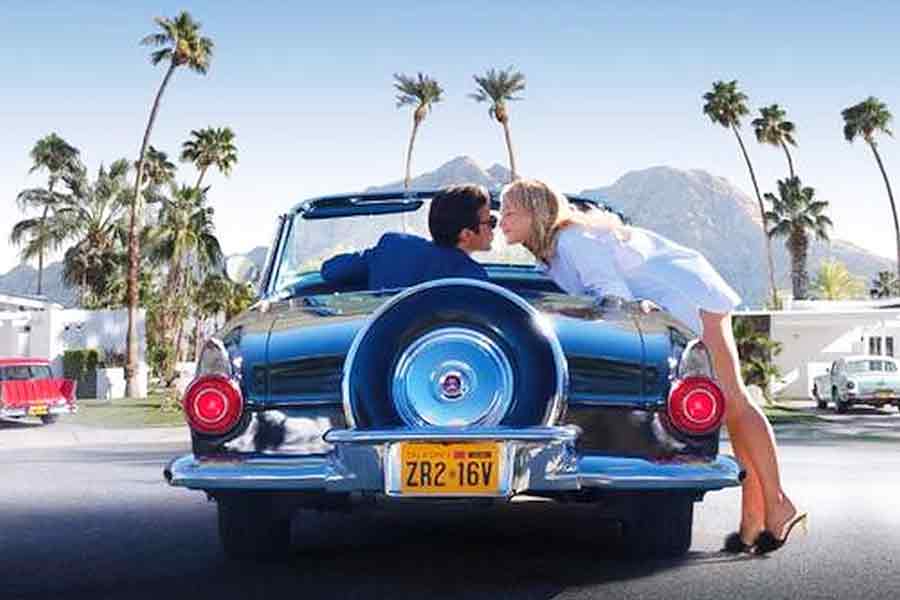 After creating a modern teen classic with Booksmart, actress, and director, Olivia Wilde shifted her skillset to crafting a subversive, chilling, deconstructive psychological thriller…in theory. With the announcement of pop sensation Harry Styles as the male lead and the initial drop of the trailer last year, moviegoers were instantly entranced by the world of Don’t Worry Darling and eager to see what the film would bring to the table. Much to the unfortunate surprise, a mix of behind-the-scenes drama and a script with loosely threaded or completely lacking narratives is labeling the film as yet another with wasted potential. But was everything about the film as bad as the majority is saying?

The film features esteemed actress Florence Pugh as Alice, a housewife living in a picture-esq 1950s community with her husband Jack (Harry Styles) who works for the Victory Project run by a mysterious man named Frank (Chris Pine). As the film progresses, strange events and behaviors from neighbor Margret (Kiki Layne) lead Alice to question where she lives. Up until the over-anticipated twist the film is stunning in it’s visuals and the cast replicates the energy.

Though many have noted Harry Styles’ performances in particular as one of the weaker ones of the film, aside from a few unenthusiastic lines, he does a decent job of portraying Jack. The atmosphere crafted by the cinematography, the costume design, and the overall mystical yet unsettling feeling embedded in the world of Victory certainly sets the film apart from many others that discuss similar themes and aim to conclude an overall message about society. The film has been received as somewhat heavy-handed by many critics as others have described certain scenes in the film as foreshadowing that doesn’t intersect with the reveal of what Victory is at all.

While the film sets up Frank to be the big bad, and it’s definitely believable due to Chris Pine’s incredible performance, the subsequent twist occurs after Alice is sent away to be reevaluated for her “episodes”. She returns seemingly restored to the happy, docile housewife she used to be until Jack starts playing a song she’s been humming inexplicably throughout the film. A couple of flashbacks and a terrifying introduction to “incel Harry Styles” later, and we learn that Victory is a simulation and that Jack has reduced Alice to a comatose state, forcing her to live in this twisted fantasy. As soon as this is all revealed, the floodgates open, attempting to tie up all loose ends and bring to fruition the foreshadowing that was placed throughout the film.

What’s so intriguing about Don’t Worry Darling is the amount of meticulous subtleties that add up perfectly while simultaneously presenting aspects that don’t add up at all. From Olivia Wilde’s character Bunny being the only woman in Victory to know it’s true origins, which explains her reluctance to discuss Victory in depth with her friend group, to a seemingly throw-away comment from the group of men about how “unattractive” Jack is which seems preposterous when directed at Harry Styles but as mentioned, Jack is far from clean cut and British in the real world.

Most films “foreshadowing” is completely misleading and makes viewers wonder if they’re watching two different movies. Perhaps the most prominent misdirect is Margaret, who Kiki Layne has been very vocal about in the coming days since the film’s release. According to Layne, Margret and her husband Ted, played by Ari’el Satchel, were key figures in the film before being cut from numerous scenes. This surprised and infuriated many viewers as Margret is the first woman to truly question her whereabouts and leads Alice down her path of discovery.

For a character involved in such crucial plot points, many wonder why the decision was made to cut scenes, and what those scenes contained. From what we do see of Margaret, her character is nothing but a martyr for Alice to gain just the right amount of speculation before killing herself halfway through the film. Her scenes also don’t seem to suggest Margret exactly knows she’s in a simulation. She supposedly takes her son into the forbidden desert that perimeters Victory while he’s carrying a toy plane that later, Alice sees crash into a mountain. It’s alleged that Margret’s son was taken from her because “she knew too much” but based on the parameters provided for us in the film, this doesn’t make a whole lot of sense.

The kids in victory are part of the simulation, not actual bodies tethered to it like the women. So did she reach Victory headquarters and her son disappeared because the signal was lost? Did Victory not recognize him as a part of the program anymore? Did Frank do something behind the scenes to take her son away and if he has that power why wouldn’t he stop Alice’s escape towards the end?

The ending is riveting and suspenseful enough and of course leaves on a breathtaking cliffhanger as Alice finally reaches headquarters again after killing Jack meaning there is no one to plug her back into Victory so she can finally make her escape. She narrowly evades the clutches of the men in red chasing her and when she finally arrives at headquarters, the same images repeated throughout the film flash across the screen and then goes black with nothing but a penetrating gasp from Alice.

The audience is left to assume she made it out from Victory but without a definitive answer. If the film and it’s messages weren’t messy enough the behind the scenes drama has tainted this film forever as being one of the most controversial topics in Hollywood. Most of the discourse stems from Olivia Wilde herself, who had alleged tension with almost everyone on set and off, from Shia LaBeouf who originally was cast as Jack to Florence Pugh herself. Not to mention her bold claims about Don’t Worry Darling being a feminist film and emphasizing the empowering nature of the sex scenes when once again it’s revaled that Alice is in victory against her will and one of the reasons Jack decided to put her there was her lack of attention to their sex life.

Despite all these glaring discrepancies, on-screen and off Don’t Worry Darling deserves to be applauded for its subversion of “the man’s world” and what exactly that would look like. The idea that most modern men would rather live in a technologically stunted 19050s paradise with their wives reduced to house workers rather than a traditional “masculine” virtual world full of video games and violence is chilling and really speaks to to the dangers and violating nature of female domesticity. The film is laughably misconstruing when presenting most of its messages but the central message is not lost and is expanded upon in fresh ways even though a lot of the film falls into familiar tropes. Regardless of how you feel about this film or the drama surrounding it, it’s certainly one that people are talking about and will be talking about for years to come.

The post Is Don’t Worry Darling’s Stellar Cast and Beautiful Cinematography Enough to Save it? appeared first on Pop Culture Press, part of the Pop Culture Madness Network.