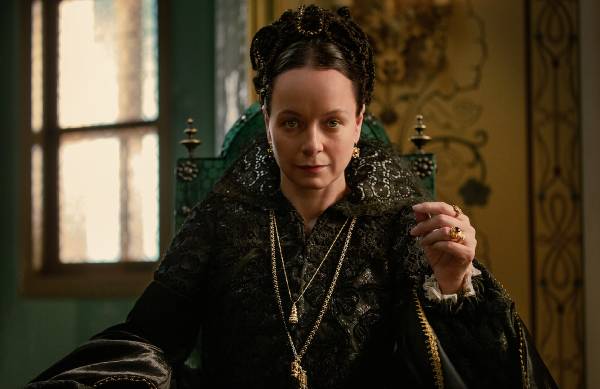 The producers shared with us several details about the production such as the stunning visuals, the cast chemistry, and the importance of sharing the story of Queen Catherine de’ Medici and her rise to power.

When asked what it was about this story and why it was so important to tell, Justin Haythe tells us, “I wasn’t looking for a period show and I wasn’t looking for a royal show…when I read this book at the suggestion of Erwin [Stoff] and our good friend Francis who is also a producer on the show I thought this was an incredible modern character. I thought it was female anti-hero and I had never really seen someone who you were utterly sympathetic for and rooted for when they got one over on someone who was unfairly working against them. We were also scared to wonder just what she was capable of and I also thought she was incredibly modern.

I thought the world that she found herself in, Renaissance France, was kind of hilarious and absurd where anyone could just die at any second…where the whole system was based off of ‘God, picked me cause I have a shiny hat’…it’s a dangerous and funny world.  I thought that tone with this really sympathetic human and modern character would make a really interesting show.”

Talking about the value of presentation and the elaborate costuming and set locations, Erwin Stoff reveals, “Those castles and such are very, very real! Those were the actual places. We shot in the actual halls, gardens, and rooms that Catherine live in.”

Haythe adds, “We shot the show under a lot of duress because it was in the middle of COVID, but it afforded us some opportunities. One of which was the fact that these buildings were closed for the first time to the public. They have thousands and thousands of people who visit the palace as tourists and we had it to ourselves. We were wandering around these spaces and the scale is ridiculous. I mean, they are so gorgeous. so ornamental and they were built, I think, as acts of presentation. Acts of power as presentation. This is a time when people were living in caves and subsistence farming and down the road is an incredible palace. I think so much about royalty was managing their image and I think Catherine was masterful at managing hers.”

Stoff says, “One of the castles we shot. and had about 400 rooms, it was built as a hunting lodge. King Francis, I think, only visited it twice!”

When discussing casting Samantha Morton in the lead role, Haythe reveals, “The debate for us was how do you tell Catherine’s story because you have to tell the really young section and see how young she was when she plucked out of that orphanage and dropped in the French court world of vipers. She then had to consummate her marriage in front of everyone, which would be every teenagers worst nightmare and then to see how that person was young enough to fall in love with the person she was promised to which was a cataclysmic mistake, and see how that person outlived multiple kings and out maneuvered everybody…had ten children and lost nine of them and we had to tell of that and it is impossible to do with one actor.

Samantha [Morton] I think is one of our greatest living actors, as she is absolutely extraordinary. I think that she holds an innate mystery to her and you look at her will as this depth and you want to keep going and she could embody that question of is she good, capable of badness or is she bad, capable of goodness?”

Stoff adds, “One of the first things that Samantha Morton will tell you about herself is, so we are not speaking out of school, is she comes from a very working class background. England which is still very much a class-oriented society, if you come from a working class background you are aware of that your entire life, so she really had a fundamental and innate understanding of what Catherine, who was not a royal, was up against. Another thing was in one of the very first conversations we had with Samantha, she began to talk about the script and she said ‘It’s kind of “Goodfellas” in the Renaissance’ and we thought ‘Yes! That is the tone!’ everybody is on the make and people are around to shiv each other and no one really trusts each other, but it’s weirdly fun to watch.”

Catherine’s story is one that has been told throughout history from all angles, so we had to know what it was about this source material, Leonie Frieda’s book “Catherine de Medici: Renaissance Queen of France” that made the producers feel they need to tell this particular story.  Haythe tells us, “I think there have always been two versions of Catherine in history, one of which is a villain for example the Saint Bartholomew’s Day Massacre, an evil queen…that is that version and in this biography, it is a very sympathetic portrait of her and I thought the version that hadn’t been told was down the middle between those two and that was someone who was very sympathetic and very relatable, who really had done these terrible things and they were required in order to survive.

I think in this era of antiheros, the Tony Soprano’s, the Walter White’s, that was the unique time to tell this version of the story where she was neither villain or pure innocent.  She was somebody where we understood why she did what she did and rooted for her to do it.”

We have thoroughly enjoyed the first several episodes of “The Serpent Queen” and we can see it quickly becoming our newest historical drama series addiction. It has just enough of a modern edge, set within the Renaissance time period, to give this series a unique advantage that will appeal to both history buffs and casual viewers equally.