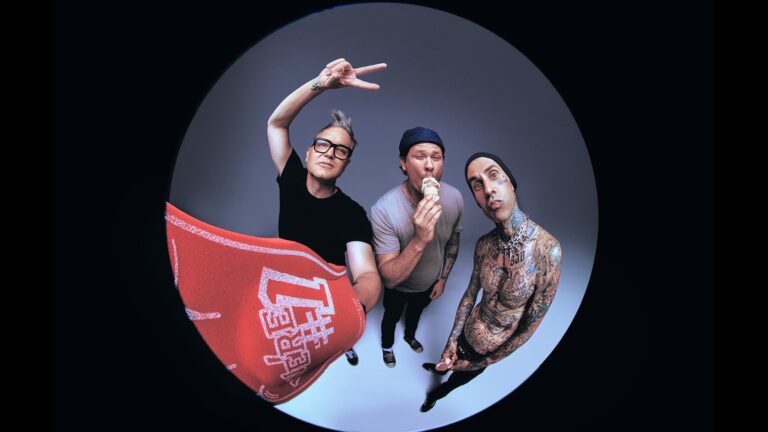 blink-182 are back with their brand new single “Edging.” The track from their forthcoming studio LP. It is their first piece of music with original guitarist and vocalist Tom DeLonge since the 2021 EP Dogs Eating Dogs. Stream the official audio now below.

The single was produced by blink-182 drummer Travis Barker.

“I wanted to imagine as a listener what I wanted to experience and at the same time as a band member what we wanted to make and say and most importantly how it would sound production wise in 2022,” Barker said in a statement.”

Bassist and vocalist Mark Hoppus added, “I’m so happy to be back in the studio creating new music and looking forward to a giant world tour.”

Next year marks the 20th anniversary of blink-182’s 2003 self-titled album. Released via Geffen, the platinum-selling record would be the band’s last before a lengthy hiatus. They regrouped in 2011 and released Neighborhoods, which is the band’s final LP to date with Tom DeLonge. The band’s last proper LP was 2019’s Nine featuring Alkaline Trio’s Matt Skiba.

Earlier this week, blink-182 announced a massive 2023 world tour. The trek begins on March 11, 2023, at Imperial GNP in Tijuana, Mexico. The shows mark their first-ever performances in Latin America. The North American leg begins on May 4, 2023 at the Xcel Energy Center in St. Paul, MN. The band will perform in Chicago, New York, Boston, Washington, D.C., Los Angeles, Dallas, and many more cities. From there, the band will head to Europe, Australia, and New Zealand. See the full tour itinerary below.

Turnstile will serve as special guests at the North American shows. The Story So Far will accompany blink-182 on the European leg. Rise Against are tagging along for the performances in Australia and New Zealand.

As part of the trek, blink-182 are confirmed as co-headliners of the 2023 When We Were Young Festival alongside Green Day.