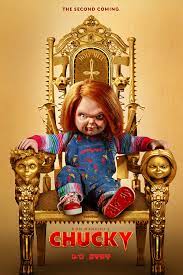 The killer doll from the 80s is back. Chucky is back for a season two which premieres tonight on the USA Network and SYFY. The huge ratings and  positive reviews from fans and critics alike helped bring back the iconic killer doll back to life one more time, and we couldn’t be happier.

Don Mancini is behind season two and has been the creative force behind the Childs Play franchise since day one. Childs Play the movie premiered all the way back in 1988, and has since spawned many sequels and an eventual tv series. Childs Play follows a widowed mother who gives a doll to her son, unaware that the doll is possessed by the soul of a serial killer.

Chucky season two will see the return of many characters from the movies and the first season including Jennifer Tilly, Devon Sawa, Fiona Dourif, and Brad Dourif the original voice of Chucky.